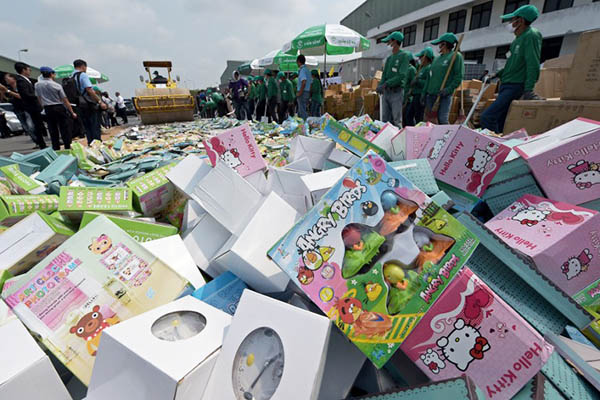 The United States on Thursday kept China, Pakistan and India on its Priority Watch List of trading partners that fail to protect intellectual property rights (IPR), hurting the economy.

In its annual Special 301 Report, the Commerce Department’s U.S. Trade Representative said there were now 13 trading partners on its Priority Watch List, three more than its previous report. Ecuador and Ukraine were newcomers, and Kuwait was added late last year. Ecuador made the Priority Watch List because of its repeal last year of its criminal IPR provisions. “The current lack of criminal procedures and penalties invites transnational organized crime groups that engage in copyright piracy and trademark counterfeiting to view Ecuador as a safe haven,” the USTR report said.

Ukraine’s government had not resolved problems identified two years ago by the U.S. that include widespread use of illegal software by Ukrainian government agencies and the failure to adopt effective means to combat online copyright infringement, it said. While welcoming promising efforts by the Ukrainian authorities, the USTR said it was looking forward to seeing “tangible and lasting improvement, both in legislative reform and in practice.”

Kuwait was moved to the Priority Watch List in November after failing “to introduce legislation resulting in a copyright law consistent with international standards, and resume effective enforcement against copyright and trademark infringement.”

The other countries on the Priority Watch List were Argentina, Algeria, Chile, Indonesia, Russia, Thailand and Venezuela.

There were new and longstanding concerns about IPR protection and enforcement. The report highlighted new measures such as conditioning market access on the use of Chinese-indigenous IPR and the conduct of research and development in China.

“A wide range of U.S. stakeholders in China continues to report serious obstacles to effective protection of IPR in all forms, including patents, copyrights, trademarks, trade secrets, and protection of pharmaceutical test data,” it said. “Given the size of China’s consumer marketplace and its global importance as a producer of a broad range of products, China’s protection and enforcement of IPR continues to be a focus of U.S. trade policy.”

India also remained on the list but the Obama administration was upbeat about future improvements under the government of business-friendly Narendra Modi, who took office last May, following last year’s out-of-cycle (OCR) review to encourage progress on IPR issues.

The USTR has “the full expectation that the new channels for engagement created in the past year will bring about substantive and measurable improvements in India’s IPR regime for the benefit of a broad range of innovative and creative industries.” It said it would not announce another OCR for India “at this time” but would monitor progress over the coming months.

The Special 301 Report, based on public testimony in a review of 72 trading partners, covers a broad range of issues, from online piracy and counterfeiting to theft of trade secrets and legal barriers.

“Tens of millions of Americans owe their jobs to intellectual property-intensive industries. Strong and balanced protection and enforcement of intellectual property are critical for promoting exports of U.S. innovative and creative goods and services, and sustaining those jobs here at home,” said U.S. Trade Representative Michael Froman.

Froman said in a statement that the report served as an “important tool” in the government’s effort to “ensure that Americans can bring their inventions and creations to people all over the world without their work being infringed or misappropriated.”

The 2015 report also underscored some success stories. Italy, for example, had implemented new regulations in 2014 to combat online copyright piracy. The Philippines, which came off the Watch List last year, had undertaken enforcement reforms that included increased seizures of pirated and counterfeit goods.