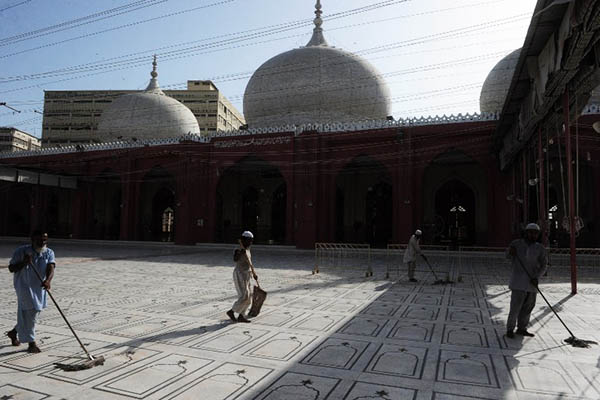 Senior clerics of the Wafaqul Madaris al-Arabia on Monday warned the government against imposing any further restrictions on congregations in mosques in a bid to curb the spread of the novel coronavirus, saying the crisis required citizens to spend more time on prayer.

The Wafaqul Madaris al-Arabia, an organization representing more than 12,000 madrassas across Pakistan, announced its decision after a meeting between more than 50 senior clerics of Rawalpindi and Islamabad in the federal capital. In addition to the clerics, representatives of the Jamiat Ulema-e-Islam (Fazl) and banned group Ahle Sunnat Wal Jamaat were also present at the meeting.

Two weeks ago, the government had announced a ban on prayer congregations of more than five people to prevent large groups from gathering in mosques in a bid to curb the spread of COVID-19. It had also required the mosques to remove rugs and carpets, wash floors regularly and commit to social distancing during prayers.

Announcing their decision, Jamia Darul Uloom Zakaria President Azizur Rahman Hazarvi—also a member of JUIF in Islamabad—vowed that clerics would try to avoid any clashes with the government and state institutions. He said the meeting did not agree with the government’s limits on mass prayers, as the clerics believed times of crisis required more time for prayers. Therefore, he said, congregations would continue five times daily, for Friday prayers and for Taraweeh prayers during the holy month of Ramzan, which is set to begin next week.

As a sop to the government, the clerics announced the congregations would take preventative measures such as using hand sanitizers, removal of rugs and carpets, washing of floors, cleaning of hands with soaps and social distancing. “The closure of mosques, shutting down Friday prayers and Taraweeh is unacceptable to the countrymen,” said Hazarvi, adding that seeking the forgiveness of Allah and increasing the people praying in mosques was the only was to eradicate the virus. He also urged government leaders to seek forgiveness for the crisis.

The meeting’s participants also slammed the government for arresting clerics that were violating restrictions on mass prayers, and demanded all cases against them to be dismissed. The clerics claimed they had cooperated with the government—a proven falsity as there are numerous reports of clerics violating orders and allowing large congregations—to curb the coronavirus outbreak, but police had behaved poorly with mosque administrations.

Also on Monday, Religious Affairs Minister Noorul Haq Qadri announced that the government would discuss extended restrictions on congregations in mosques with various stakeholders. The government has yet to formulate or announce any strategy for mosque restrictions during Ramzan.

Unlike Pakistan, most of the Muslim world has strictly imposed bans on congregations in mosques. Saudi Arabia banned prayers in mosques last month, while similar restrictions have been adopted by Turkey, Egypt, Jordan and Iran.