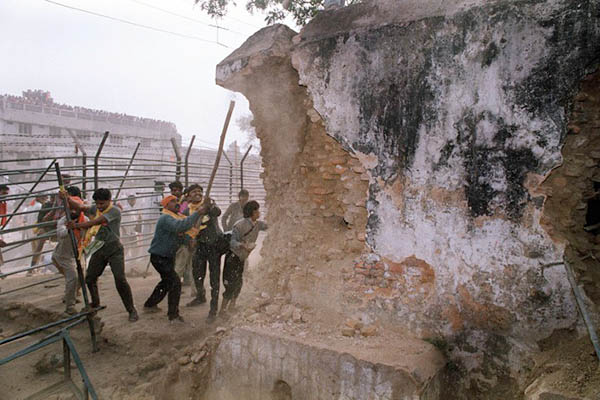 Indian court acquits all 32 suspects over lack of evidence, claiming attack was not ‘pre-planned’

Pakistan on Wednesday “strongly” condemned an Indian court’s acquittal of all 32 accused in the 1992 demolition of the Babri Masjid, saying the “Hindutva-inspired Indian judiciary” had failed to deliver justice in the long-pending case.

“This is yet another manifestation of the pliant judiciary under the extremist BJP-RSS regime in which extremist ‘Hindutva’ ideology takes precedence over all principles of justice and international norms,” read a statement issued by the Foreign Office. It alleged that this was the continuation of an Indian Supreme Court ruling from earlier this year in which the Babri Masjid’s land was allocated to Hindu parties for the construction of a temple. “The acquittal today is even against that verdict which had noted that the demolition was ‘an egregious violation of rule of law’,” it added.

Branding the development the latest example of state-backed marginalization of minorities, particularly Muslims, the Foreign Office said that it pointed “to India’s fast descent into a Hindu Rashtra, where minorities have been relegated as second-class citizens.” Stressing that in the past year India had ramped up its “willful targeting of Muslims,” the statement listed the anti-Muslim Citizenship Amendment Act; the ongoing military siege of India-held Kashmir; the looming National Register of Citizens; and February’s massacre of Muslims in New Delhi as some example of the BJP-RSS’ anti-Muslim agenda.

“The RSS-BJP regime and the Sangh Parivar are responsible for the continued desecration and demolition of mosques in India in an organized manner as they did during the Gujarat massacre of 2002 and Delhi pogrom in 2020,” it said, noting that attacks by Hindu zealots had continued even during the COVID-19 pandemic.

“Pakistan urges the Indian government to ensure safety, security and protection of minorities, particularly Muslims and their places of worship and other Islamic sites on which the Hindu extremists and zealots have laid claims,” it said, adding that the global community must also play its role in safeguarding Islamic heritage sites in India from “the extremist Hindutva regime, and ensure protection of religious rights of minorities in India.”

Earlier on Wednesday, an Indian court acquitted all 32 accused in the Babri Masjid demolition case, claiming lack of evidence. The ruling followed the court refusing to accept most of the evidences submitted by India’s Central Bureau of Investigation, including videos and photographs from December 1992.

Judge S.K. Yadav read out the 2,300-page judgment on his last day in office. He refused to accept any video-tape evidence, claiming it had not been forensically authenticated.

Referring to the evidence furnished by the CBI and statements of witnesses, the court said none of these show that the accused had assembled and planned any such act before the incident took place on Dec. 6, 1992. The judge also did not accept any newspaper reports as evidence.

According to Indian media, 48 people had initially been framed for the demolition of the Babri Masjid, of whom 16 had died during the trial.

Indian Defense Minister Rajnath Singh welcomed the controversial verdict. “It proves that justice triumphed however late it may be,” he was cited as saying by The Times of India. The All India Muslim Personal Law Board, meanwhile, said it opposed the judgment. “We will appeal against the judgment in the High Court,” the organization’s secretary Zafaryab Jilani.