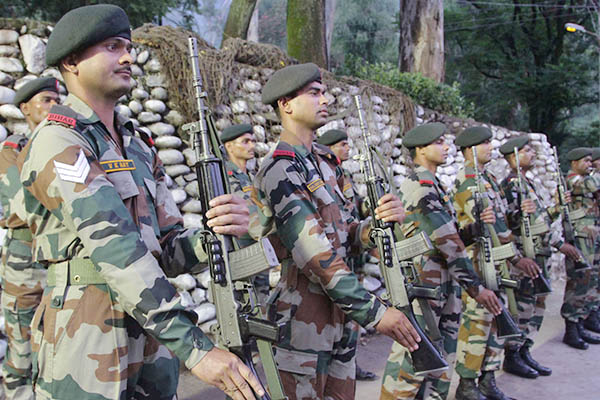 During the hotline communiqué, the DGMOs (director-general military operations) of both armies discussed the Line of Control (LoC) and recent alleged incursions from both sides. Pakistan Army DGMO Maj. Gen. Ashfaq Nadeem informed his Indian counterpart that Pakistan had not violated the ceasefire agreement and rejected claims that Pakistani troops had crossed the Line of Control. He also condemned a shooting incident that left two Pakistani soldiers wounded late on Tuesday.

Earlier on Tuesday, India accused Pakistan’s military of involvement in an ambush on an army post in disputed Kashmir, which killed five soldiers. India’s defense minister said New Delhi had lodged an official protest with Islamabad for what was the deadliest loss of life for the Indian Army since a 2003 truce agreement.

“We strongly condemn this unprovoked incident,” Defense Minister A. K. Antony told lawmakers in Delhi amid calls from the Indian opposition for a “powerful” response from the military. “The attack was carried out by 20 heavily armed terrorists, along with persons in Pakistani army uniform,” he said. “The government of India has lodged a strong protest with the government of Pakistan through diplomatic channels.”

Officials in Indian-administered Kashmir said the attack had taken place late Monday at a military outpost in the Poonch region, around 200 kilometers south of the state capital Srinagar.

The picturesque Himalayan territory of Kashmir is divided between India and Pakistan by an U.N.-monitored de facto border known as the LoC, but is claimed in full by both countries.

“Pakistani troops simply attacked the Indian post, violating the ceasefire, and they killed five of our soldiers,” a senior army official in Indian-administered said on condition of anonymity. Another senior army official said a sixth soldier who managed to escape was being treated in a military hospital for multiple injuries.

Despite the protests from India, the Pakistan Army and government have denied responsibility.

“No Pakistani troops either crossed into India nor carried out any unprovoked firing,” a military spokesman said in Islamabad. A senior military official later accused India of firing shots that seriously injured two Pakistani soldiers.

“Two Pakistan army soldiers were seriously injured due to unprovoked Indian firing on the Line of Control near Muzaffarabad on Tuesday afternoon,” the official said.

The foreign ministry said Islamabad was committed to a decade-old ceasefire in Kashmir and wanted a strengthening of existing channels to stop “such ill-founded reports” in the future. “Pakistan is committed to a constructive, sustained and result-oriented process of engagement with India and looks forward to an early resumption of the dialogue process,” it said.

Hopes of progress in the beleaguered peace process have risen in recent weeks but Omar Abdullah, Indian-administered Kashmir’s chief minister, said the attack would undermine efforts at rapprochement.

“These incidents don’t help efforts to normalize or even improve relations with Pak & call in to question the Pak Govt’s recent overtures,” he tweeted.

India and Pakistan have fought three wars since their independence from Britain in 1947, two of them over Kashmir. A deadly flare-up along the LoC in January brought low-level peace talks to a halt, which had only just resumed after a three-year hiatus sparked by the 2008 attacks in Mumbai that killed 166 people.

However the election of moderate Prime Minister Nawaz Sharif in May’s Pakistani polls has fuelled expectations of a restart.

Sujatha Singh, India’s new foreign secretary, said last Thursday that India would be “picking up the threads” of peace talks with the new Pakistani government. Singh however said that any dialogue with Islamabad “presupposes an environment free of violence and of terror.”

Speaking on the same day, Sharif reiterated his desire to resolve “all longstanding issues with India, including Kashmir.”

But after the attack, India’s main opposition Bharatiya Janata Party (BJP) said talks could not take place in such an environment. “Pakistan has killed our soldiers today and this is becoming a routine. They are very aggressive … why are we holding talks with such country?” Yashwant Sinha, one of the BJP’s leaders, told lawmakers. “It is time we give a powerful reply. Our army is not weak. We should not ignore this deadly incident.”

Sonia Gandhi, president of the main ruling Congress party, also said India “would not be cowed” by such “blatant acts of deceit.”

Indian analysts said the attack would undermine New Delhi’s trust in the new Sharif government in Islamabad. “This incident will have a serious impact on the relations between India and Pakistan,” said Lalit Mansingh, a former foreign secretary.

More than a dozen armed rebel groups have been fighting Indian forces since 1989, demanding independence for Kashmir or a merger with Pakistan. Although there had been a lull in violence, this year has seen a resurgence of deadly militant attacks on Indian security forces.

India’s army has also carried out a number of large-scale operations in the region in recent months. Around 25 militants have been killed by the armed forces in the past month, according to Indian officials.