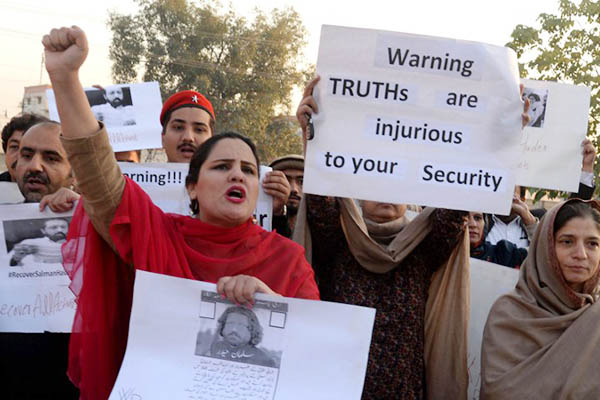 The federal government on Wednesday constituted a committee to investigate the ongoing practice of enforced disappearances across Pakistan.

According to a notification issued by the Interior Ministry, the committee will be led by Law Minister Farogh Naseem and will also comprise Human Rights Minister Shireen Mazari; Adviser to the P.M. on Accountability Shehzad Akbar; the Islamabad Chief Commissioner; the Islamabad Inspector General of Police; a representative of the Inter-Services Intelligence spy agency; and a representative of the Intelligence Bureau.

“The committee shall deliberate on the reasons behind the enforced disappearances and give recommendations on how to control these incidents,” read the notification.

There have been mounting reports of enforced disappearances across Pakistan, including in the federal capital, prompting the Islamabad High Court chief justice to slam the government over becoming “silent spectators” to the “abhorrent violation of fundamental rights.”

Last week, the International Commission of Jurists also issued a briefing paper in which it lamented that Pakistan’s Commission of Inquiry on Enforced Disappearances had failed to address the issue despite having been in operation since March 2011. “This commission has failed in holding even a single perpetrator of enforced disappearance responsible in its nine years,” said Ian Seiderman, ICJ legal and policy director. “A commission that does not address impunity, nor facilitate justice for victims and their families, can certainly not be considered effective,” he added.