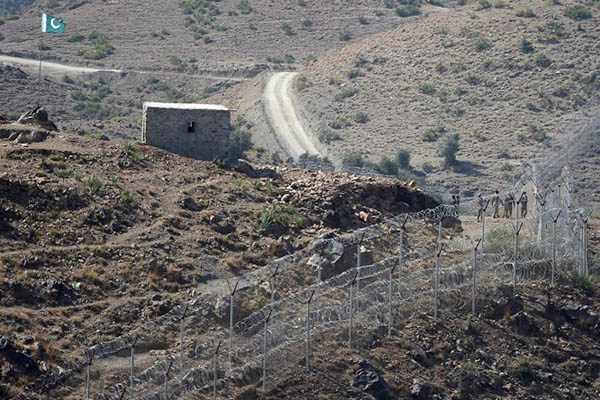 Pakistan’s military took the rare step of flying international media to the border with Afghanistan on Wednesday to showcase its efforts to harden the porous, militancy-wracked frontier: a chain-link fence shrouded in barbed wire.

The roughly 10-foot tall fence, which Pakistan announced it had begun building in March, stretches through parts of the rugged tribal districts of North and South Waziristan along the Afghan border. Over recent decades militants from the Afghan Taliban, Al Qaeda, and other militant groups have operated with impunity in the region, crossing the colonial-era frontier at will.

A top Pakistani officer in South Waziristan told foreign media at Angoor Adda’s Hamza Fort that the fence was an “epoch shift” in control of the border. To date only 43 kilometers of the border have been separated by the fence, but the officer said the entire length would be covered by the end of next year.

“There’ll not be an inch of international border that shall not remain under observation by December of [20]18,” said the officer, who the military requested not be named. “By the time we are done, God willing, we’ll be very sure of one thing, that nobody can cross this place.”

Pakistani soldiers at the forts spaced along the frontier scanned the rolling, bush-covered hills on the other side. Inside the forts, more troops monitored CCTV cameras trained on the fence, illuminated by solar power at night.

The military also took reporters by helicopter to Kitton Orchard Fort near Ghulam Khan in North Waziristan, more than 200 kilometers away.

Pakistan and Afghanistan have long accused one another of offering safe havens in the border region from where militants could launch devastating cross-frontier attacks. In August, President Donald Trump lambasted Islamabad for harboring “agents of chaos” on its soil.

Washington has for years accused Pakistan of allowing Afghan Taliban fighters to regroup inside its borders and target NATO and Afghan troops inside Afghanistan. Islamabad has repeatedly denied the accusations, and claimed the U.S. has ignored the price it has paid in thousands of lives as it grapples with militancy.

Kabul, meanwhile, has denounced the fence, which threatens to upset the daily lives of communities who have traditionally paid little mind to the border.

Afghanistan has refused to recognize the Durand Line, a 2,400-kilometer frontier drawn by the British in 1896, as it splits the Pashtun ethnic group between the nations. Some villages straddle the frontier, with mosques and houses with one door in Pakistan and another in Afghanistan.

Residents there now face stricter controls and are obliged to use official crossing points, which are subject to delays and frequent closures including one that was lifted last week after a full month.

The media visit to the fence came after a U.S. drone targeted a compound along the border used by Taliban-allied Haqqani fighters late Monday, killing over two dozen militants. The barrage was initially reported to have struck inside Pakistan but this was later refuted by Islamabad, highlighting the opaque nature of where the border exactly lies.