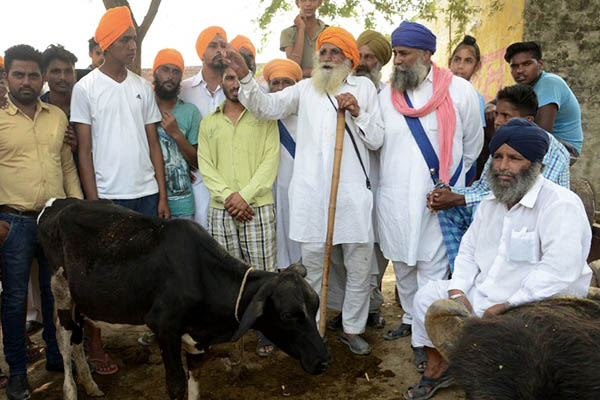 Residents of border villages hope there is no war, noting the primary victims are civilians such as themselves.

As he surveyed his largely deserted village along India’s border with Pakistan, Kuldeep Singh cast his mind to his childhood when his home was on the frontline of a full-blown war between the two rival nations.

“All of this reminds me of when I was a boy back in 1971 and I can now understand what my father must have felt like sending me away to live with his relatives back then,” said the father-of-three. “My wife and kids are already getting restless to come back home after three days. I’m also missing them but we don’t yet know what’s going to happen, so it’s better to wait another day or two.”

The 54-year-old farm laborer sent his wife and three children to live with relatives after a dramatic escalation of tensions between the two nuclear armed-rivals this week which saw India claim to have carried out a series of strikes on the Pakistani side of the de facto border in divided Kashmir.

The evacuation order was delivered over the loudspeaker from the local gurdwara in what is a mainly Sikh village. The Singh family’s village of Naushera Dhalla in the northern Punjab state is around 40 kilometers from the Sikh holy city of Amritsar and barely a kilometer from the border.

Like Kashmir, Punjab was also divided between India and Pakistan when both gained their independence at the end of British colonial rule seven decades ago and parts of the state became battlefields when the two countries went to war in 1965 and most recently in 1971. While India says it has no desire for a further escalation in the situation, it has nevertheless ordered thousands of villagers to move away from the border in case they once again become a theater of war.

While most of Naushera Dhalla’s 4,500 residents have sought shelter elsewhere, a few male residents have stayed behind to look after their land and livestock, and protect their property from potential looters.

Speaking to an AFP correspondent while huddled in the center of the village, those who have remained all said they felt they couldn’t afford to do otherwise but had no illusions about what was at stake.

Lakhvinder Singh, a 58-year-old tailor, said he too had vivid memories of the 1971 war when Naushera Dhalla also emptied in a matter of hours and soldiers took over their rudimentary mud-hut homes. “The shelling and firing started around 5:15 p.m. in the evening and we left by around 9:30 p.m. the same night,” he said. “We could see the light of bombs and gunfire in the dark night from both the sides. It is tense at the moment but I don’t think there will be war—there shouldn’t be a war. But if there is, it’s people like us who will lose the most. Even though we are happy for what our government has done with an attack on terrorists, we don’t think war will do us any good.”

The 1971 war began after India intervened in the war of separation, which led to Bangladesh’s (formerly east Pakistan) independence. Since then, both countries have become nuclear powers, which means that any sharp downturn in relations sends alarm bells ringing in diplomatic circles.

In another village even closer to the border, Sohan Singh said he could remember way back to Partition when Punjab became the main setting for the largest mass migration in history before becoming a war zone. Singh, who gave his age as “about 85,” said there was no way that he would take to his heels and desert the small village of Danoi Khurd also close to the border.

“Where would we go? If we leave, we will starve,” said Singh, surrounded by around two-dozen male villagers who were all discussing the tensions. “I’ll be here for as long as I am alive.”