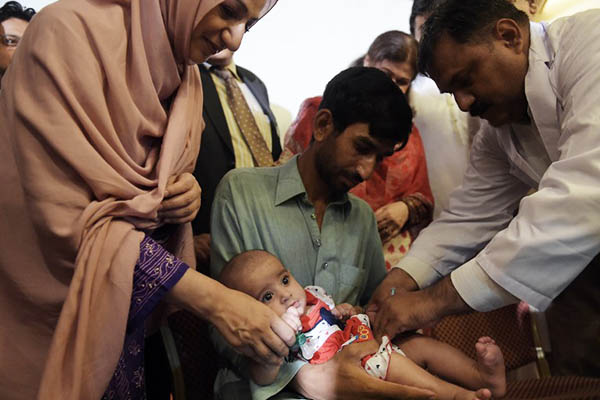 Islamabad aims to wipe out the deadly disease by 2016.

Pakistan on Thursday formally launched an injectable polio vaccine, an important step to accelerate its polio eradication campaign as the authorities vowed to wipe out the disease by 2016.

More than four million children will benefit from the inactivated polio vaccine (IPV), which will be incorporated into the country’s routine immunization schedule and given to children alongside other jabs.

Pakistan is one of three countries in the world where polio remains endemic. Nigeria, which recently marked one year without a case of wild polio, introduced IPV earlier this year and Afghanistan is due to begin using it in the coming weeks.

Pakistan has made substantial progress in reducing the crippling childhood disease, with only 29 cases reported so far this year, compared with 115 in the same period in 2014.

Saira Afzal Tarar, deputy health minister, hailed the IPV introduction as a landmark. “We are hopeful that we will intercept the virus by 2016,” she told AFP.

Efforts to eradicate polio in Pakistan have been hit by longstanding rumors that the traditional oral polio vaccine (OPV) contained harmful substances and was part of a plot to sterilize Muslims. The injected vaccine is more expensive than the OPV and needs a nurse or doctor to administer it, but needs only one dose to ensure immunity, unlike the oral vaccine which is administered several times.

Dr. Lamia Mahmoud of the World Health Organization (WHO) said IPV was an important tool to bolster the immunity of infants against poliovirus, especially those who have not had adequate opportunities to receive the oral vaccine.

Attempts to eradicate polio in Pakistan have been badly hit by opposition from militants, who say the program is cover to spy on their operations. Their attacks on immunization teams have claimed 78 lives since December 2012.

Last year the number of polio cases recorded in Pakistan soared to 306, the highest in 14 years.

Pakistan’s military in June last year launched a ground and air blitz against militant groups in North Waziristan, forcing millions of civilians to leave their homes and settle in other districts. All those fleeing the region were given polio drops as they entered neighboring Khyber-Pakhtunkhwa province, allowing health workers a chance to reach families who had not been vaccinated for years.

Tarar said the military offensive had had a major impact. “Miracles are happening after this [military] operation. Kids who were inaccessible are now coming to us,” she told the gathering which was attended by UNICEF, WHO and senior health officials.