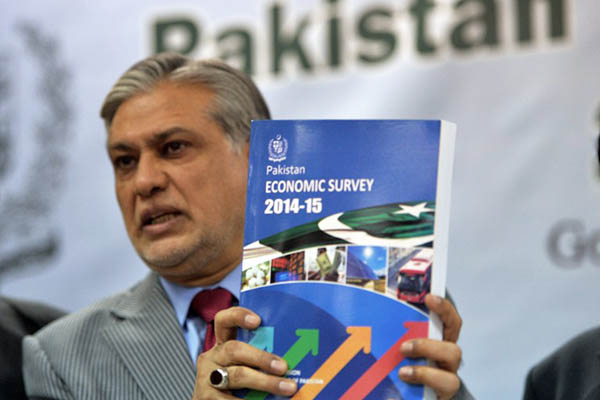 Despite lower-than-predicted GDP growth, per capita income has increased by 9.25 percent.

Pakistan has missed its economic growth target for the current fiscal year but per capita income rose significantly, giving hopes for ambitious GDP growth in the coming year.

Finance Minister Ishaq Dar on Thursday launched the country’s “Economic Survey” for the outgoing year 2014-15, reviewing all the aspects of the country’s economy for the fiscal year ending June 30.

Pakistan had set its growth target at 5.1 percent on the assumption of higher agricultural production, improvement in energy supplies and better investment prospects. However with the key economic sectors missing their targets, GDP growth has been revised to 4.24 percent.

“According to provisional estimates the GDP growth during 2014-15 remained at 4.24 percent,” the minister, reading the survey, said at a televised press conference. However, growth was higher than the 4.03 percent posted in the previous fiscal year, he said.

The agriculture sector grew at 2.9 percent compared to the target of 3.3 percent, industry grew 3.6 percent against a target of 6.8 percent, and the services sector grew at 5.0 percent, just short of the 5.2 percent target.

The financial wizards however were enthralled with the sharp growth in per capita income that rose by 9.25 percent to $1,512 during the fiscal year. “The main contributing factors of this rapid increase in per capita income include acceleration in real GDP growth, relatively lower growth in population and the consistent Pakistani rupee,” Dar said.

Pakistan was also able to significantly cut its current account deficit to 0.6 percent of GDP from 1.3 percent last year for the first 10 months of the current fiscal. The financial year saw significant achievements as interest rates were curtailed to seven percent, a 42-year low on the back of historic 4.8 percent inflation.

Prime Minister Nawaz Sharif’s government vowed to revive the Pakistani economy after he took over power in May 2013. International credit rating agencies have upgraded Pakistan’s ratings. The Sharif government is scheduled to table the national budget for the year 2015-16 in Parliament on Friday.