Pakistan on Alert After Qadri Hanging 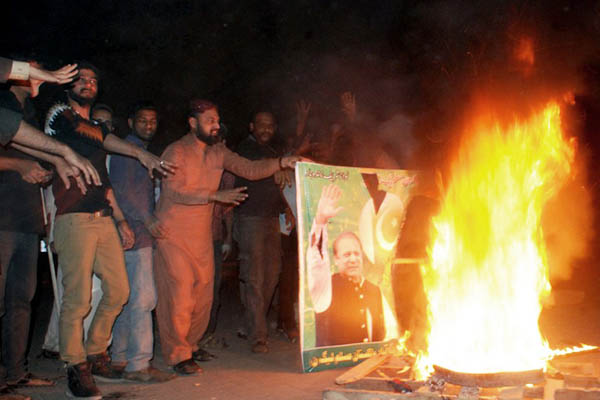 Pro-Qadri residents of Hyderabad protest against his execution. Yousuf Nagorai—AFP

Following the hanging of Mumtaz Qadri, the assassin of Salmaan Taseer, Pakistan on Monday was on high alert to forestall rioting from Islamist supporters who had threatened violence if he was executed.

Security was stepped up at flashpoints across the country including Rawalpindi, where hundreds of supporters began gathering at Qadri’s family home. Riot police were deployed in Islamabad as officials braced for protests from hardliners.

Qadri, a former police bodyguard, shot then Punjab governor Salmaan Taseer 28 times in an upscale market in Islamabad in 2011. He later confessed to the killing, saying he objected to the politician’s calls to reform controversial blasphemy laws.

“Qadri was hanged in Adiala jail early Monday morning” in Rawalpindi, said senior local police official Sajjid Gondal. His body was being displayed to hundreds of supporters at his family’s home in the city, where paramilitary Rangers and police in riot gear as well as ambulances and dozens of police vehicles were stationed, an AFP reporter there said.

Armed Rangers could also be seen on the roof of the building housing Qadri’s residence, while authorities blocked some roads in the neighborhood.

Cries were heard from inside the house as hundreds of men and women gathered, and mosques could be heard broadcasting news of the execution.

“I have no regrets,” Qadri’s brother Malik Abid told AFP, tears rolling down his cheeks, while women chanted poetry nearby. He said the family had been called to the prison Sunday evening by officials, who said Qadri was unwell.

But when they arrived, he greeted them with the news that authorities had deceived them, and that his execution was imminent. “We started crying, but he hugged us and chanted ‘God is great,’” Abid said.

“We have beefed up security in Rawalpindi to maintain law and order and to deal with any untoward situation,” Gondal said.

Islamabad police spokesman Zia-ul-Qamar told AFP security has been tightened all over the capital. “Islamabad police are on high alert to deal with any situation in the wake of the hanging,” he said. “Riot police have already been deployed in all sensitive areas and the Red Zone.”

In Karachi, protesters blocked main intersections and some petrol stations were closed after Qadri supporters ordered them shut. A police spokesman said security forces were on high alert and extra police were being deployed to clear the roads.

However, on Twitter some people were hailing the execution, calling it “justice served.”

Justice has been done. Mumtaz deserved the gallows and his hanging brings to close the sad chapter.

Law is uniform for all, broken the law.. face the punishment

Sad news he was a good man he did the right jon by killing him…Hope nawaz bothers are next.

You are bunch of dogs who will always remain confused