Pakistan Only Hurting Itself With NGO Expulsion: U.S. 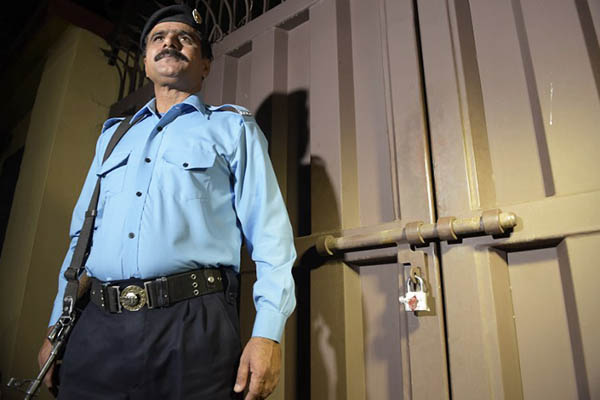 The sealed offices of Save the Children in Islamabad. Aamir Qureshi—AFP

The United States on Friday warned Pakistan it was only hurting itself after Save the Children was expelled for “working against the country,” with Islamabad threatening to throw out more foreign aid groups.

Pakistan has toughened its policies toward international aid groups in recent years, accusing them of being covers for spying operations, and has repeatedly warned them to restrict their activities, vowing stern action for any “suspicious” activity.

Police and government officials sealed the Islamabad offices of Save the Children on Thursday, but gave no specific details of what the group was alleged to have done. Washington expressed concern at the move and said several non-governmental organizations “have reported increasing difficulty doing business in Pakistan.”

“This has had a significant negative impact on international partner efforts to support government of Pakistan priorities,” said State Department spokesman John Kirby.

The statement came hours after Interior Minister Chaudhry Nisar Ali Khan said Parliament was debating whether to expose what he said were the “many” foreign NGOs bent on undermining Pakistan. “Many NGOs are working against Pakistan and we are deliberating on exposing them in Parliament,” Nisar told reporters. “Non-government organizations working against the country’s national interest will not be allowed to continue their work in Pakistan.”

Aid groups have complained in recent years that increasing government restrictions on their activities has hampered their efforts to help vulnerable people in a country that still has huge numbers who live in poverty. They say their work in so-called “sensitive” areas such as Balochistan province have been particularly affected.

Without naming any organizations, Khan said some NGOs had been operating without proper regulation and had worked in Balochistan when they had permission only to work in Islamabad. In 2012, the government expelled the expat staff of Save the Children, which has worked in Pakistan for over 35 years and employs 1,200 Pakistanis. That move came after Pakistani intelligence services accused the charity of links to doctor Shakeel Afridi, who the CIA allegedly used to carry out a fake vaccination program as they searched for Al Qaeda chief Osama bin Laden.

Save the Children has always vehemently denied any link to either Afridi or the CIA.

“Pakistan’s international development partners respect the government of Pakistan’s need for full transparency from INGOs [international NGOs] involving their activities within the country,” Kirby said in a statement. “We also agree INGOs must operate within a relevant legal and regulatory framework. For that reason, we urge the Government of Pakistan to standardize and streamline a transparent process that will allow INGOs, including Save the Children, to work legally in Pakistan.”