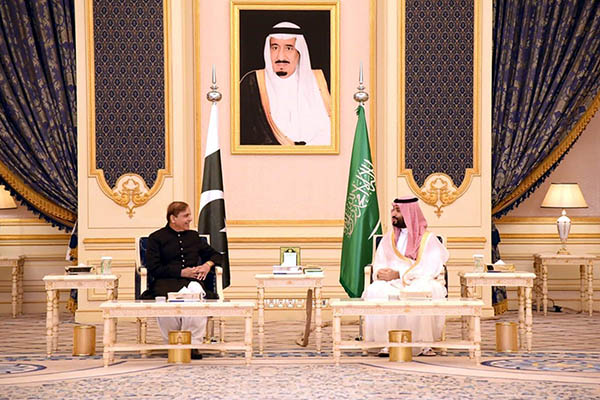 According to a statement issued by the Prime Minister’s Office, the two leaders talked to each other via telephone and exchanged views on matters of mutual interest. “Both the leaders reaffirmed the resolve to further the strong, longstanding Pakistan-Saudi Arabia fraternal ties,” it said, adding they had also reviewed progress on the decisions taken during the premier’s official visit to the Gulf kingdom in April.

Recalling the historic support extended by Riyadh to Islamabad in times of need, Sharif thanked the crown prince for the “recent support for the stability and development of Pakistan’s economy.” While this was not specified, it was likely a reference to Saudi Arabia extending a loan to Pakistan to shore up its foreign reserves.

The PMO said the prime minister had also conveyed his deep respects to King Salman bin Abdulaziz. Citing the crown prince, it said he had congratulated Sharif and the people of Pakistan on the country’s 75 years of independence and conveyed his best wishes for the continued progress, prosperity and development of the country.

According to the statement, the prime minister reiterated his invitation to the crown prince for a state visit to Pakistan, which the latter accepted.

P.M. Sharif last visited Saudi Arabia in April shortly after assuming office. At the conclusion of the trip, Saudi Arabia agreed to discuss extending the term of a $3 billion loan to help the government shore up Pakistan’s foreign exchange reserves.