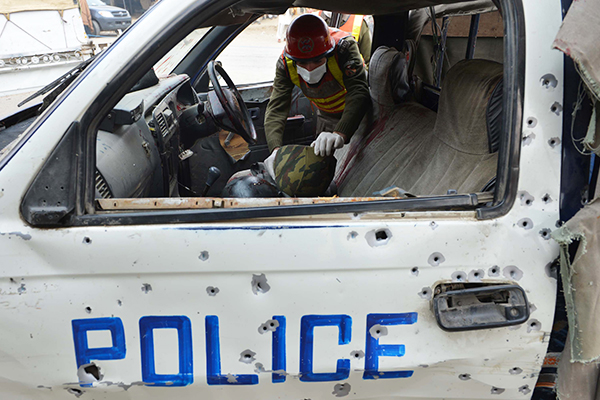 Analysts say the law is ‘fraught with risks.’

President Mamnoon Hussain on Wednesday signed into law fresh amendments to the Protection of Pakistan Ordinance, 2013, that will allow security forces to detain suspected terrorists for up to 90 days without formal charges and without having to disclose their whereabouts.

The ordinance says the government may “authorize the detention of a person for a period … that shall not exceed 90 days if, in the opinion of the government, such person is acting in a manner prejudicial to the integrity, security, defense of Pakistan.” It also allows the government and armed forces to withhold details of where anyone detained under the order is being held.

Under the new law, suspects can be tried in “special courts,” which are allowed to exclude the public from hearings and withhold details of proceedings. Anyone facing charges under the ordinance must demonstrate his or her innocence to a court—reversing the usual legal burden of proof. Security forces have also been granted powers to open fire on anyone they see committing or “likely to commit” any of a list of terror-related offences.

The law also applies to suspects already in custody.

The order comes as Pakistan grapples with a surge in militant violence, with at least 104 people killed in militant attacks in the past week, and it appears to be an attempt to give legal cover to the cases of so-called “missing persons,” suspects who disappear into the alleged custody of security forces with no information given to their relatives. A campaign group formed by the relatives of such missing persons says as many as 2,000 people have disappeared from across the country, many from restive Balochistan province.

Imtiaz Gul, executive director at the Center for Research and Security Studies, voiced concern about the measures “This ordinance is controversial because it has not been debated enough by Parliament and it is fraught with risks including serious implications for human rights,” he said. “The right to shoot in defense as well as on suspicion is … a blank check to security forces.”

A much needed step – it’s the first good thing done by the current govt.

And for those who think ‘firing on suspicion’ would be detrimental, well i would say; dont look/act suspicion!