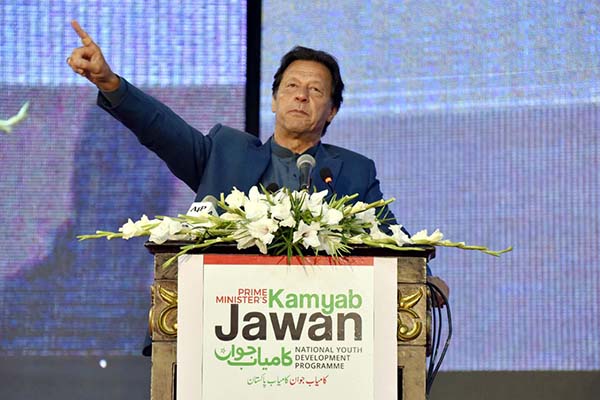 Prime Minister Imran Khan on Thursday vowed that his government would never again allow Pakistan to join anyone else’s war, adding that Islamabad would instead play a role in promoting peace between countries.

“We will fully strive for the establishment of friendly relations between Saudi Arabia and Iran,” he told a gathering in Islamabad to mark the launch of the Rs. 30 billion Hunarmand Pakistan program. Khan said he had also offered to mediate peace between the U.S. and Iran in conversation with U.S. President Donald Trump. “No one wins wars. Even those who ‘win’ end up losing,” he said, noting that Pakistan had paid a heavy price in the U.S.-led war on terror.

In his address, the prime minister reiterated his longstanding stance that Pakistan’s youth were the country’s greatest asset. “Skilled youth can change the destiny of the nation,” he added.

Khan said the incumbent government was dedicated to investing in Pakistan’s manpower, claiming the youth had been neglected in the past because multiple education systems had fostered discrimination between the rich and poor.

Referring to the Hunarmand Pakistan program, the prime minister said it would train 500,000 youth over four years in modern technology, including artificial intelligence, big data, robotics.

The first phase of the program, he said, had already been allocated Rs. 10 billion and would be responsible for the training of 170,000 youth. He said 500 technical training centers would be established across Pakistan, with 70 of them in madrassas to ensure religious schools were not left out. He claimed the incumbent government would bring 2.5 million madrassa students into the national mainstream.

Khan said the next phase of the program would focus on setting up 300 smart training centers, where students would have access to international teachers in accordance with global standards. “These centers will have national accreditation to ensure there is a healthy competition among the students and they all strive to better themselves,” he added.

“We have to train our youth so they can get jobs and feed their families,” he said, noting there was only so many jobs that the government could provide. “The government’s job is to create an environment for job opportunities,” he added.

During his address, the prime minister reiterated that the Pakistan Tehreek-e-Insaf-led government wanted to transform the country into a truly welfare state in line with the state of Madina. He said the Ehsaas program was part of this goal and would seek to uplift the poor and neglected segments of society.

Earlier, Education and Professional Education Minister Shafqat Mehmood and Special Assistant to the P.M. on Youth Affairs Usman Dar also took the podium to highlight various aspects of the Hunarmand Pakistan program and the government’s efforts to equip the country’s youth with modern technology and high skills. Dar said interested candidates should register themselves on the website of Kamyab Jawan Program.

Meanwhile, in a statement, the opposition Pakistan Muslim League (Nawaz) claimed the Hunarmand Pakistan program was merely a rebranded version of the Prime Minister’s Youth Program introduced by former prime minister Nawaz Sharif in 2013. “Renaming and rebranding PMLN’s project and inaugurating it with his name plaque will not change the fact that Imran Khan is the most incompetent, unqualified, inept and lying prime minister to have ever taken office in Pakistan,” said PMLN spokesperson Marriyum Aurangzeb. “Nawaz Sharif’s youth program was exactly the same. It provided the youth an opportunity to have skill development, business, small and medium enterprise, vocational training, laptop scheme, scholarships and internship programs.”