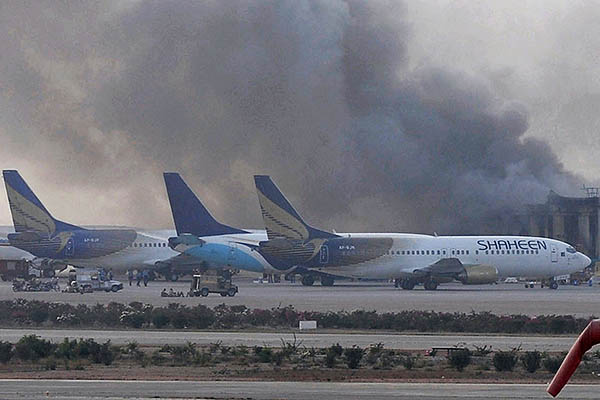 Security forces say at least 35 people, including 10 militants, are dead in siege that lasted nearly 12 hours.

Security forces said on Monday that the Karachi airport had been cleared of militants, as the Pakistani Taliban claimed responsibility for a siege that left at least 35 dead.

Last week, the spokesman had claimed responsibility for attacks on security forces in Bajaur Agency and Fateh Jang, adding, “any atrocious and brutal act will be dealt with in the same fashion.”

“The federal government is not mentally, psychologically and ideologically prepared to take action against the militants,” said political and defense analyst Hasan Askari, who said that Prime Minister Nawaz Sharif’s peace drive looked in bigger doubt than ever. “If the government still insists on dialogue with the militants, then they will run into difficulties with the military,” Askari warned.

Meanwhile, a spokesman in Karachi said the airport had been secured. “The attack is over and we have cleared the area of all militants, and we will hand over the airport to the Civil Aviation Authority at 12:00 p.m.,” paramilitary Rangers spokesman Sibtain Rizvi told reporters.

Earlier, an AFP reporter at the scene on Monday morning said shots could be heard again inside the airport, where explosions and fires had erupted during the night, and that dozens of trucks filled with soldiers were moving into the complex. “We have relaunched the operation and called in additional troops,” said Rizvi, adding that one police officer had been injured in the new firing. The initial assault at Jinnah International Airport in Karachi began late Sunday and raged until dawn, when the military said that all 10 attackers had been killed.

Equipped with suicide vests, grenades and rocket launchers, they had battled security forces in one of the most brazen attacks in years in Pakistan’s biggest city. Among the 18 victims were four airport workers.

After the six-hour siege, military spokesman Maj. Gen. Asim Bajwa had declared in a tweet that the area was “cleared” with “all vital assets intact.”

The assault will raise fresh concerns about Pakistan’s shaky security situation, and questions about how militants were able to penetrate the airport, which serves one of the world’s biggest cities.

Officials said the gunmen entered from two sides of the airport at around 11:00 p.m. on Sunday—the terminal used for the hajj pilgrimage, and an engineering section close to an old terminal that is no longer in use. This was followed by three huge blasts as suicide bombers detonated their explosives.

Smoke was seen billowing from the airport as fires raged close to planes parked on the runway, while militants, some dressed in Army uniforms, clashed with the airport’s security force, police, paramilitary squads and elite commandos.

A senior intelligence official said it appeared the militants had aimed to hijack a plane that passengers were boarding at the main terminal, but that when they were repelled they went on a rampage. “The passenger plane at Jinnah terminal was their target and when they failed to reach there they destroyed two private terminals in frustration,” he said.

After the attack was quelled, a bomb disposal expert in full protective gear was seen walking from the site carrying a suicide vest and a bag full of hand grenades.

Broken glass and spent gun magazines littered the engineering section where the first exchange of gunfire took place as smoke from grenade attacks began to die down. “I heard fierce firing and then saw the terrorists firing at security forces … Thank God I am alive, this is very scary,” said eyewitness Sarmad Hussain, an employee of the Pakistan International Airlines (PIA).

Syed Saim Rizvi, who was on board a plane on the runway, tweeted: “Huge blast!!!! I do not know whats [sic] going on outside—heavy firing started again—full panic on board!”

The city’s Jinnah Hospital said that 14 bodies had been brought there, including eight airport security personnel, a ranger, a civil aviation official and four PIA staff. Another 26 people were wounded, spokeswoman Seemi Jamali added.

PIA spokesman Mashoor Tajwar said no airline passengers were caught up in the incident. “None of the passengers were trapped in the building, we had diverted all the flights to Lahore and Nawabshah,” he said. Pakistan’s Civil Aviation Authority said normal flight operations would resume at Karachi on Monday afternoon.

On Monday night, nearly 12 hours after the siege ended, rescue officials found the charred bodies of seven employees trapped in the airport’s cold-storage facilities. The employees had gotten trapped after hiding from the militants, according to their relatives, and the raging fire prevented their rescue.

Similar raids in the past have been claimed by the Taliban, who rose up against Islamabad in 2007 in an insurgency that has claimed thousands of lives. In 2011, Taliban gunmen attacked the Mehran naval base, which lies close to the airport, destroying two U.S.-made Orion aircraft and killing 10 personnel in a 17-hour siege. The group also carried out a raid on Pakistan’s military headquarters in Rawalpindi in 2009, leaving 23 dead including 11 troops and three hostages.

The airport assault will cast attention on the government’s controversial decision to negotiate with the Taliban instead of using greater force. The PMLN-led government began negotiations with the TTP in February, with a ceasefire beginning March 1 but breaking down a month later.

The Airport Security Personnel Are Responsible For The Security Lapse. Although The Attack Was Repulsed And Quashed, It Is A Serious Warning For All Concerned To Pull Up Their Socks.

Any enemy easily comes and starts terrorism here just because of our careless attitude.We need to improve our security system,and be alert in those areas where terrorist activities are mainly expected.