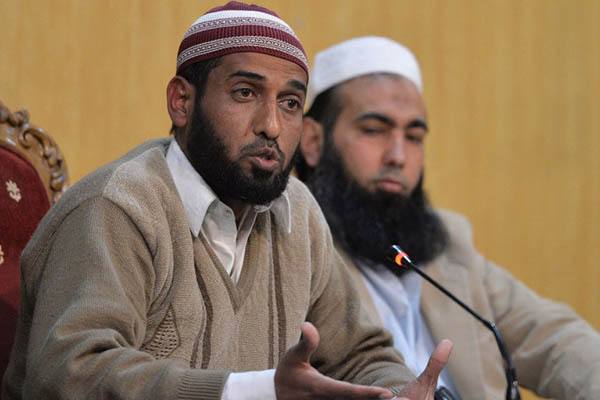 The Pakistanis who were jailed in Spain address a press conference. Aamir Qureshi—AFP

Imprisoned in 2009 on terror charges, seven of the 10 men have claimed they did not receive a fair trial.

A group of Pakistanis jailed in Spain in 2009 over a plot to bomb the Barcelona metro protested their innocence on Thursday, claiming a corrupt witness framed them.

Jan Khan, the legal consultant for the men, said they wanted to clear their names of the terror charges. Ten Pakistanis and one Indian were jailed for between eight and 14 years in December 2009 for planning a terror attack on the metro system. Eight of the Pakistanis have served their sentences and seven of them have been deported, while one is a Spanish resident.

The seven appeared at a news conference with Khan in Islamabad. “There was no proof against them. They were sentenced on the basis of just one witness who was bribed,” Khan said. “There were many Pakistanis who provided witnesses and told the court that they were innocent, but the court sentenced them just on the basis of one witness who was bribed by the secret Spanish services.”

He urged the Pakistani government and rights groups to try to have the case reopened.

“Our lawyer misguided us. He advised us not to speak in court and we could not provide our stance properly,” said Hafeez Ahmed, a resident of Rawalpindi who was detained in a mosque in Barcelona. He also claimed to have been tortured while in police custody.