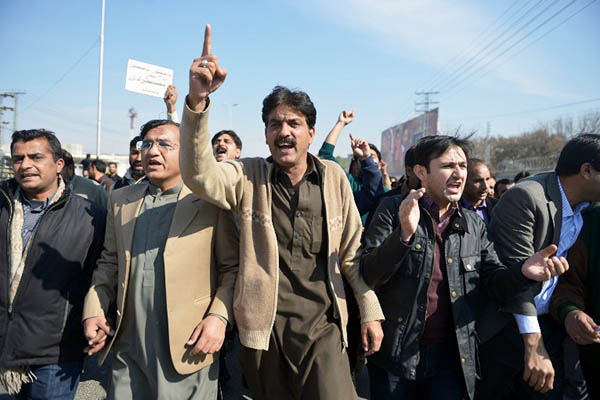 National airline’s employees say they will continue protests until their demands are met.

Pakistan’s airports were plunged into chaos Wednesday as employees of the national flag carrier protested the deaths of two colleagues killed while demonstrating against plans to privatize the airline.

All of Pakistan International Airline’s foreign and domestic flights were suspended, and employees held strikes at airports in major cities across the country. At Karachi’s international airport, demonstrators waved placards and chanted slogans against Prime Minister Nawaz Sharif, calling on the leader to reverse a bill that converted the carrier into a public limited company.

A day earlier, two protesting employees were shot dead and several more wounded at the airport when clashes broke out between security forces the staff, though authorities denied opening fire.

The strike came despite Sharif’s warning the demonstration was illegal and those taking part could face up to a year in prison under a law that restricts union activity in state-administered sectors.

PIA’s chairman Nasir Jaffer meanwhile offered his resignation, though it has not been accepted by Sharif, according to airline spokesman Danial Gilani. “Everything is shut now and flight operations have come to a complete halt,” he told AFP. The carrier could lose around $4 million in revenue per day, Gilani added.

Protest leader Sohail Baloch said: “We will continue our peaceful protests until our demand is met.”

The employees also said they would donate a day’s salary to the families of the two employees who were killed.

In December, Islamabad announced it would complete the partial sale of the carrier by July, following years of crushing losses and mismanagement that have battered the airline’s reputation.