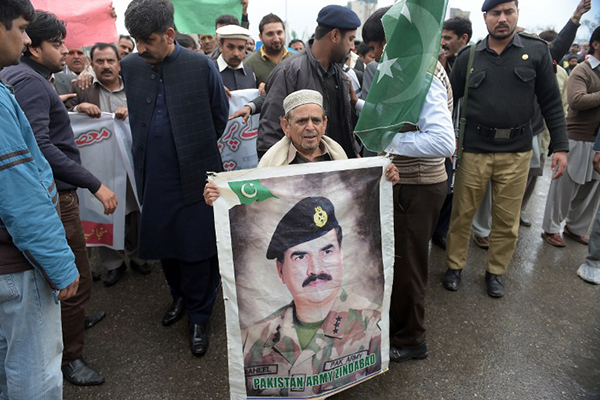 Rights being rolled back under guise of antiterrorism measures, say activists.

Pakistan’s Army is preparing for a final push in the coming weeks in its fight against militants, but there are concerns that rights are being rolled back in the name of defeating terror.

A year on from the launch of a major offensive to eradicate strongholds of the Taliban and other militants in North Waziristan, the military says the job is 90 percent done.

It is now positioning troops around the Shawal Valley, a key location close to the Afghan border that is home to some of the last redoubts of the Tehreek-e-Taliban Pakistan, according to locals and security sources.

The Army says it has killed more than 2,700 militants since the launch of the offensive—Operation Zarb-e-Azb—last June, and destroyed more than 800 of their hideouts.

A senior military official directly linked to the offensive said the Army was gearing up for the final push and using air strikes before moving in ground troops. “We are turning hard targets into soft through aerial bombing because forces expect a resistance in Shawal,” he said.

The troop movements were confirmed by locals, though some tribal elders warned militants were slipping across the porous mountainous border into Afghanistan. “Up to two dozen militants are leaving the area every day and around 200 militants recently moved into part of Afghan territory,” said Ajab Khan, a tribal elder. He warned the remaining areas where Taliban fighters are holed up will be difficult fighting terrain—mountainous and thickly forested.

But security analysts caution that military gains will serve little purpose unless and until the lawless, semiautonomous tribal areas see administrative reform and economic development.

The Federally Administered Tribal Areas are among the poorest in Pakistan, and are governed under a draconian legal system introduced by British colonial rulers more than a century ago.

“The longevity of the ‘final push’ would largely depend on the constitutional status of the region,” said Imtiaz Gul, executive-director at Center for Research and Security Studies (CRSS). “Until the FATA region is mainstreamed and brought under the law of the land, keeping it clear of militants and criminals would be difficult.”

Hundreds of thousands of civilians were forced to leave North Waziristan by the offensive. Talat Masood, a former lieutenant-general, said reintegrating them was the key to success: “These military gains will only be a part of the exercise. Complete success depends on the rehabilitation of the displaced people and development in the tribal region.”

Zarb-e-Azb does seem to have had a positive impact on militant attacks, which have been down overall, with some shocking exceptions, such as the December massacre by Taliban gunmen of more than 130 children at a school in Peshawar. But doubts have been raised about the transparency of the operation and the identities of those killed. There have been repeated reports of civilian deaths, but the military tightly controls access to the conflict zone, preventing independent assessment.

I. A. Rehman of the independent Human Rights Commission of Pakistan (HRCP) said there was no way to know for sure who the Army had killed. “We don’t know the truth about the casualties—what is the actual number of casualties, how many of them are terrorists and how many of them innocents?” He added: “They should make this action transparent. People should have access in the areas of operation.”

Concerns have also been raised about the resumption of executions and introduction of military courts, which have sat in secret, under a government National Action Plan to defeat terror, launched in the wake of the Peshawar massacre. The EU, the U.N. and various international rights groups have been alarmed by the pace of executions—around 160 since they began again in December after a six-year hiatus.

Rehman said HRCP did not accept the legitimacy of the military courts, which handed out their first rulings in April, sentencing six militants to death and another to life in jail.

The news was announced in a Twitter post by the chief military spokesman Maj. Gen. Asim Bajwa, with no details given on the nature of the crimes, when or where the trials were held, the evidence presented or even the identity of those convicted.

The Supreme Court is currently hearing challenges to the constitutionality of the military tribunals. Moreover there are doubts that the National Action Plan will do much to deal with the radicalization of young people by hardline seminaries that underlies much of Pakistan’s terror problems. “They have resumed hangings through the National Action Plan but the seminaries are still working and there is no check on them,” said Rehman.