Home Latest News Pakistan’s Stability Will Not Be Reversed: COAS

Pakistan’s Stability Will Not Be Reversed: COAS 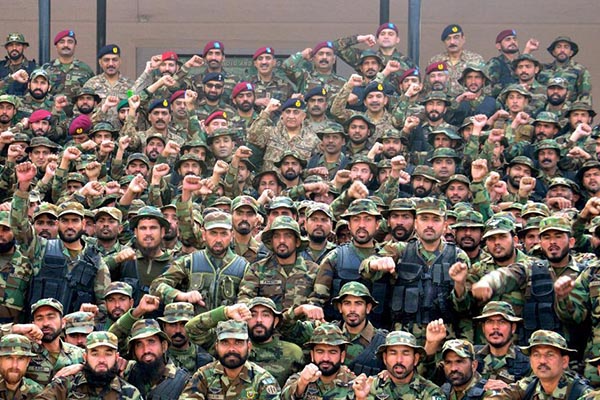 Chief of Army Staff Gen. Qamar Javed Bajwa on Wednesday said Pakistan’s armed forces had brought stability to the country by failing all inimical forces operating against it.

Addressing soldiers during a visit to the headquarters of the Special Services Group (SSG), the Army chief said the military would never allow for this stability to be reversed. According to a tweet posted by the Inter-Services Public Relations, Bajwa also called the SSG the “pride” of Pakistan’s armed forces.

“[The SSG has offered] myriad contributions toward defense of country through its valiant officers and soldiers since the creation of Pakistan,” he added.

Bajwa’s visit and statement came a day after a special court sentenced former Army chief Pervez Musharraf to death for abrogating the Constitution when he declared a state of emergency in 2007. Musharraf was a company commander of an SSG commando battalion during his service.

The Pakistan Army reacted to the verdict by issuing a statement expressing “pain and anguish” over the former president’s conviction. “An ex-Army chief, Chairman Joint Chiefs of Staff Committee (CJCSC) and President of Pakistan, who has served the country for over 40 years, fought wars for the defense of the country can surely never be a traitor,” the statement added.