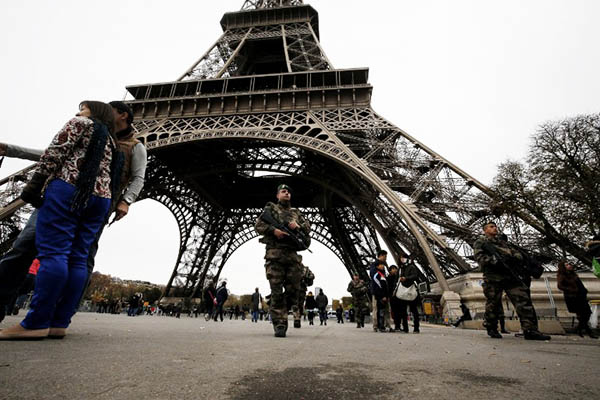 Despite drop following terror attacks, French capital is once again attracting visitors from across the world

High-kicking dancers are enthralling full houses again at the Moulin Rouge and art lovers are swarming the Louvre as Paris enjoys a tourism revival after plummeting numbers brought on by terror attacks.

Tourists are increasingly refusing to give in to fear of being caught up in a jihadist attack such as the November 2015 bloodbath in the French capital and flocking in droves once more. In a rebound that began at the end of 2016, Paris saw a record 2.6 million foreign arrivals in the first four months of this year—a 19 percent increase over the same period in 2016.

Top Moulin Rouge official Jean-Victor Clerico shakes his head as he looks back at the “black year” of 2016, when the cavernous hall was only three-quarters full on an average night. The world’s most famous cabaret enjoyed a brief uptick but a series of events—street protests against labor reforms, foul weather, and a truck rampage in the southern city of Nice that claimed 86 lives—combined “to completely wipe out the recovery,” he said.

Since then terror attacks have become more frequent and widespread, hitting not just France but also Belgium, Britain and Germany sparking “a kind of fatalism,” said Josette Sicsic, head of Touriscopie, a firm that tracks tourist behavior.

As 68-year-old American tourist Rinkie Pollack put it: “If it’s your time, it’s your time.” Visiting from San Diego, California, the retiree said: “There’s nowhere in the world where you’re safe.”

Terror attacks “are affecting tourism for shorter and shorter periods,” Sicsic said, adding that people come to Paris telling themselves: “You have to be vigilant, because everyone is aware that the world has changed.”

The tourism ministry expects a five to six percent increase in overall arrivals to France this year, for a new record of 89 million visitors in 2017. The lowest point for Paris came at the end of March 2016—four and a half months after the Paris attacks, when Islamic State group jihadists targeted ordinary people enjoying an evening out at trendy eateries, a concert hall and the national stadium.

The shootings and bombings left 130 people dead and prompted the government to impose a state of emergency—which is still in effect after being renewed several times. Some 14.5 million people visited the capital overall in 2016, a drop of five percent from the previous year.

Last year’s tourist numbers were also affected by social unrest as hundreds of thousands took to the streets around France in sometimes violent protests against labor reforms. In addition, a relentless series of robberies targeting Asians, especially Chinese, since 2013 have been a deterrent. But it is Chinese tourists, as well as Americans, who are expected to set new records this year.

Clerico said “the fear dissipated a little” as attacks mounted in other European countries.

Twin suicide attacks in Brussels in March 2016 claimed 32 lives, while December of that year saw a truck ramming at a Christmas market in Berlin that killed 12. The latest vehicle incident was in London in March, when a man ploughed his car into pedestrians on Westminster Bridge, killing five.

Nicolas Lefebvre, director of the Paris Tourism Office, like Sicsic and Clerico, said he thought people were becoming inured to terrorism. “The constant repetition of these events—there have been several in a few months, thankfully less deadly—has made them sort of part of the landscape, and it no longer stops people from imagining, thinking about, and organizing a trip to Europe, and to Paris in particular,” he said.

Sicsic said potential tourists have concluded that they “can be hit by a terrorist act in their country of origin or when traveling [so] you can’t keep boycotting Paris, London and so on.”

Enjoying a salad on the terrace of a Champs-Elysees restaurant, 25-year-old Alexa Derby said she and her family have “felt pretty safe the whole time we’ve been here.” Derby, who works as a snorkel boat deckhand in Hawaii, added: “I mean it [terrorism] is definitely on your mind, but what are you going to do? Hide your whole life and not travel?”

South African housewife Susan Sobel, 64, visiting Paris for the second time since 2007, said: “You have to seize the moment and hopefully you’ll be safe.”

However, Britons are contributing less to the recovery because of a factor that has nothing to do with terrorism: their vote to leave the European Union has dragged down the pound, making travel to the Continent more expensive.