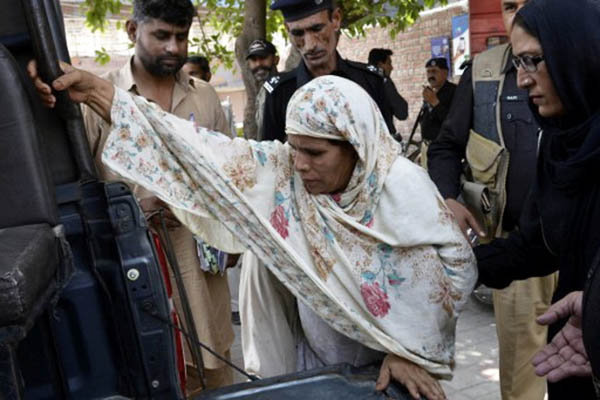 Zeenat Bibi’s brother, Anees, sentenced to life in prison for his role in the murder.

A mother who murdered her own daughter and set her alight for marrying the man of her choice has been sentenced to death, officials said on Tuesday, in a case that had revolted many in Pakistan.

Zeenat Bibi, aged 16, was doused with kerosene and set alight in June last year in Lahore, a little over a week after she wed 20-year-old motorcycle mechanic Hasan Khan against her family’s wishes. A judge in an anti-terror court in Lahore sentenced her mother Parveen Bibi to death on murder and terrorism charges, prosecutor Mian Mohammad Tufail told AFP.

She was charged under Pakistan’s terrorism laws rather than newly reformed criminal legislation against honor killings because of the use of kerosene in the murder, Tufail said. Bibi also received a 14-year jail term and was fined Rs. 1 million under separate counts related to the killing. Her son Mohammad Anees was jailed for life and fined Rs. 1.5 million for his role in the killing, Tufail said.

Bibi’s son-in-law, the husband of another daughter, was acquitted, he said.

Hundreds of women are killed by their relatives each year after allegedly bringing shame on their families in the country. Under previous legislation the culprits—usually men—could get away with the killings after being pardoned by members of their own family. But in July last year the high-profile murder of social media star Qandeel Baloch, whose brother confessed to the killing, reignited calls for reform.

In October Parliament passed a law aimed at removing the ability to forgive “honor” killers. But critics contend some loopholes still exist.

In the latest incident of honor killing, police have arrested a man for electrocuting his sister to death after she married according to her own choice. The incident occurred on Monday in a remote village of Lodhran district, in central Punjab province.

Rana Mushtaq, a police official in the area said the woman was first tortured by her brother and then tied with electric wires and electrocuted. Mushtaq said the suspect was arrested after villagers informed police.

“The brother has been arrested and he has confessed that he was not happy with his sister’s decision to marry the person of her choice,” Mushtaq told AFP.