PDM Says Lahore Rally to Proceed ‘At All Costs’ 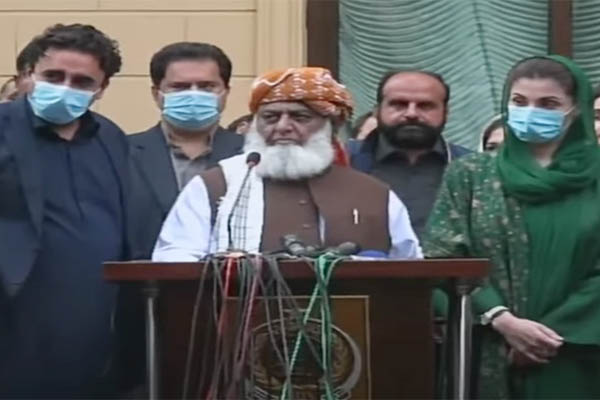 The united opposition’s Pakistan Democratic Movement (PDM) on Wednesday reiterated its vow to ensure its Lahore rally—scheduled for Dec. 13—would go forward as planned, regardless of the tactics employed by the government to prevent it.

“We took decisions yesterday (Tuesday) and we announced them to the media. Today, during our discussions, we came to debate over how the Punjab government is making a dam out of the Minar-e-Pakistan venue so that it is rendered useless to hold a rally,” he said, referring to a video posted by Nawaz showing waterlogged grounds at the historic site.

“They don’t want to stop us, but don’t want to give us permission and then where we want to hold a rally, they’ve created a dam. So we discussed alternate strategies as well. But the rally will take place at all costs,” stressed Rehman, referring to Prime Minister Imran Khan’s multiple claims of not stopping the opposition from staging rallies, but penalizing organizers or facilitators for violating coronavirus preventative measures.

The PDM chief, who also heads the Jamiat Ulema-e-Islam, said that if the government tried to push the opposition into a corner, they would be prompted to find a “second” or even a “third” path.

On the matter of the PDM’s future schedule of activities, Rehman said the alliance’s steering committee had yet to decide this. To another question, he claimed that there was no democracy in the incumbent setup.

“It is dictatorship that has buried democracy,” he said, adding that the only way forward was a democratically elected government that believed in the supremacy of the Constitution.

To a question on Senate elections, set for March 2021, the JUIF chief said if they were conducted with the current assemblies, they would be “fake.” He claimed the PDM considered “breaking the Electoral College” a democratic process, adding a strategy was being devised in this regard with the consultation of constitutional experts.

To a question on agitation politics, the PPP chairman said that his party’s origins were linked to street power. “We have fought against every dictatorship and will continue to,” he said, adding that the opposition was “on the same page” in ousting the incumbent government.

“We will use every weapon in our arsenal to send them home,” he said. “The people are all with us,” he added.

Meanwhile, the PMLN vice-president stressed that the venue of the Lahore rally would remain Minar-e-Pakistan and backed the PDM’s views as representative of the entire PDM.