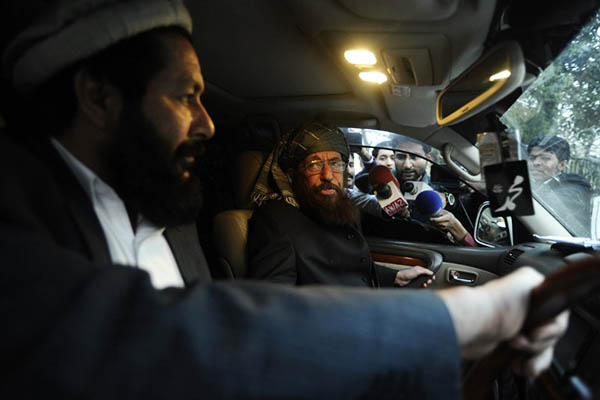 Maulana Sami-ul-Haq, the leader of the Taliban committee. Farooq Naeem—AFP

Without declaring an actual ceasefire, both sides have urged each other to announce a cessation of any ‘anti-peace’ activities.

Committees tasked by the government and the Pakistani Taliban expressed concern on Friday over a wave of deadly attacks in the country, agreeing that both militants and security forces should refrain from actions that undermine ongoing peace efforts.

The Pakistani Taliban claimed credit for a bomb blast that killed 12 policemen on a bus in Karachi on Thursday, the latest in a series of near-daily attacks since the government called for peace talks with militants to end their seven-year insurgency.

“Both the committees expressed deep grief and regret over anti-peace activities and declared that such incidents would have a negative impact on the peace efforts,” according to a joint statement issued after government and Taliban committees met on Friday. “Referring to the recent incident in Karachi, the government committee adopted the stance that it would become difficult to continue the peace talks when anti-peace activities continue,” it said.

The chief of the Taliban committee, Maulana Sami-ul-Haq, has called for a session of religious leaders on Saturday to “take the clerics into confidence” regarding the peace negotiations.

Pakistani troops have been fighting for years against homegrown insurgents in the tribal belt, which Washington considers the main hub of Taliban and Al Qaeda militants plotting attacks on the West and in Afghanistan. Nearly 7,000 people have been killed in the TTP insurgency since it began in 2007, according to an AFP tally. The start of 2014 has seen a surge in militant violence with more than 130 people killed.

An air force bombardment of TTP hideouts in North Waziristan led many to believe a major military offensive was imminent until Prime Minister Nawaz Sharif announced the peace talks.