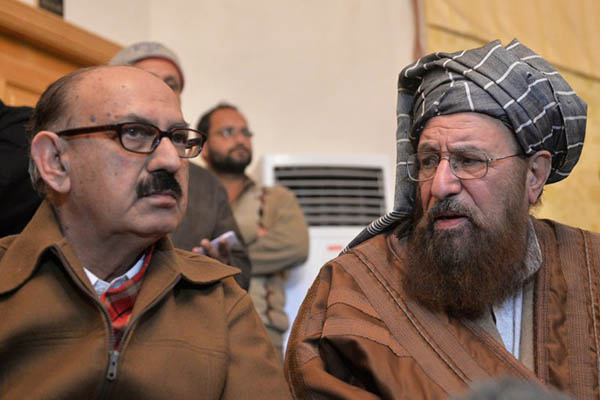 Irfan Siddiqui (left), a member of the government’s team of negotiators, talks to Maulana Sami-ul-Haq, who is representing the Pakistani Taliban. Aamir Qureshi—AFP

Negotiators are expected to meet in Akora Khattak to restart talks process after the Taliban declared a month-long ceasefire.

Negotiators for the government and the Pakistani Taliban are to meet Wednesday to restart peace talks that stalled more than a fortnight ago, sources said.

The meeting in the northwestern town of Akora Khattak comes after the Taliban announced a month-long ceasefire at the weekend, despite a major attack in Islamabad on Monday claimed by a splinter group that killed 11 people.

More than 110 people have been killed in militant attacks since Prime Minister Nawaz Sharif announced talks with the Tehreek-e-Taliban Pakistan (TTP) in late January, leading some observers to question the dialogue strategy. The TTP distanced itself from Monday’s attack, the deadliest in the Pakistani capital since a huge truck bomb hit the city’s Marriott Hotel in 2008.

An official close to the government delegation said they had arrived for the meeting in Akora Khattak. “The government committee will ask about the recent attacks, particularly the one in Islamabad, and they will also talk about how to make the ceasefire effective,” the official said.

A source close to the Taliban negotiating team, which is led by radical cleric Sami-ul-Haq, confirmed the government side had reached the town.

Talks began last month but broke down after militants killed 23 kidnapped soldiers. The military responded with a series of airstrikes in the tribal areas that killed more than 100 insurgents, according to security officials.

The Taliban’s ceasefire announcement on Saturday was met with skepticism by analysts, who said it may have been a tactic to allow them to regroup after they had suffered heavy losses in airstrikes. The government has struck peace agreements with the Pakistani Taliban several times in the past but they have failed to yield lasting results.