PIA Up for Grabs 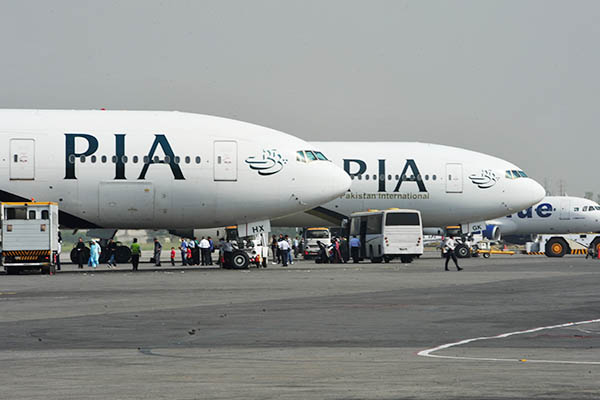 Prime Minister Nawaz Sharif plans to sell off a 26 percent stake in ailing national carrier PIA and hand over management control in a bid to stem hemorrhaging losses.

Pakistan International Airlines (PIA) is one of the poorest performing state-run companies in the country and businessmen were quick to welcome the decision, announced late Thursday. Sharif, who has made repairing the weak economy his top priority, ordered PIA management to slash losses to make the company viable for sale.

The company has incurred heavy losses because of poor management, corruption and inefficiencies. PIA officially lost $320 million last year but the deficit would have been much larger if the state had not been pouring money into its coffers in a bid to keep it afloat.

The company has a staggering 18,000 employees for 42 planes, a ratio of more than 400 staff per aircraft, a PIA spokesman said. “The government is fully committed to reforming and restructuring all ailing state enterprises, including PIA,” Sharif said on Thursday.

Under the plan, 26 percent of PIA’s shares will be offered to potential buyers along with the transfer of management control. The auction is expected to attract international players and could be a milestone for the country’s privatization plan, analysts and businessmen believe.

Pakistan sold its state-run telecom company in mid-2000 by transferring 26 percent of its shares and management control. The government offloaded another 10 percent of PTC shares later on.

Arif Habib, chairman of Arif Habib Group of Companies and on PIA’s board of directors until last month, said that the airline could attract an international buyer. “If an investor injects some capital it could be turned around in a short span of time,” said Habib, who is a former president of the Karachi Stock Exchange and a business tycoon. “It would be a good public-private partnership model,” he said.

Nevertheless the final sale is likely to face strong opposition from rival political parties and from employees.

Farrah Marwat, head of research at JS Capital Markets, said good financial packages and retirement benefits could help to defuse the complaints. “We have a big market of 180 million people and no other sizable company to cater them so it would be a good attraction for the buyers,” Marwat said.