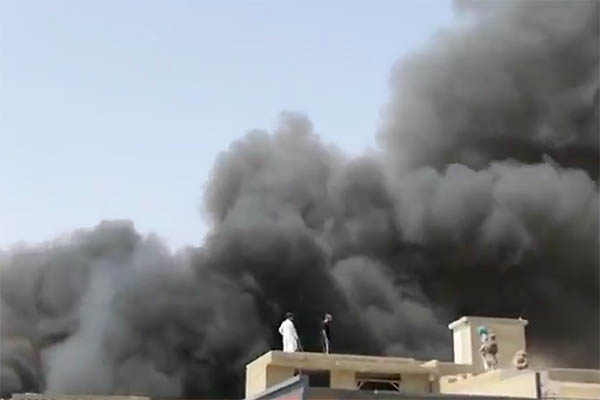 A Pakistan International Airlines (PIA) flight from Lahore to Karachi crashed near the Jinnah International Airport on Friday, mere minutes before it was due to land, with officials in Sindh confirming that at least 97 have been confirmed dead, with two survivors.

PIA spokesperson Abdullah Hafeez confirmed the crash, adding that the A-320 Airbus had been carrying 91 passengers and 8 crewmembers. The flight, PK-8303, tried to land a few times before crashing in the Model Colony residential area of Karachi, near the airport.

“We are proceeding direct, sir—we have lost engine,” a pilot can be heard saying in the final mayday call to Air Traffic Control before the crash. “Confirm your attempt on belly,” the air traffic controller is heard in response, offering a clear runway. “Sir—mayday, mayday, mayday, mayday Pakistan 8303,” the pilot said right before the transmission ended.

“The airplane hit a mobile tower and then crashed into the houses,” an eyewitness told news agency Reuters. Video footage from various sources also showed the plane with its engines on fire right before the crash, likely adding to the sharp drop in altitude that was visible to eyewitnesses.

Miraculously, two passengers who had been on the flight have survived and are being treated at hospital. The Sindh health department has confirmed that Muhammad Zubair and Zafar Masood, who is the president of Bank of Punjab, had both survived.

Earlier media reports had suggested a third survivor, but overnight it emerged that she was a resident of the area where the plane crashed. At least 11 people were injured when the plane crashed into the houses, razing several to the ground.

“There was fire everywhere, and everyone was screaming after the plane crash. I opened my seatbelt, and headed towards the light,” Zubair, who was seated in the eighth row, said on a local television broadcast.

Footage from eyewitnesses showed plumes of smoke rising from the site of the crash, with several houses and cars in the immediate area on fire in the aftermath. Firefighting efforts continued into the evening, before the flames were brought under control sufficiently for authorities to commence clearing the rubble and verifying if any bodies had been left buried.

Ambulances and rescue officials were quickly deployed to the scene to help residents and any survivors of the crash. The Pakistan Army Quick Reaction Force and Rangers troops were also deployed to assist the civil administration in relief and rescue efforts.

The Health and Population Welfare minister declared emergency in all major hospitals of Karachi due to the plane crash, noting that healthcare facilities had already been on alert due to the COVID-19 pandemic.

Chief Marshal Mujahid Anwar Khan, Chief of the Air Staff, Pakistan Air Force, expressed grief over the tragedy, adding PAF stands by PIA at this difficult time and extends full support in rescue efforts. Federal Aviation Minister Ghulam Sarwar also expressed deep grief and sadness over the incident. He said the Aircraft Accident Investigation Board had been ordered to conduct an “immediate inquiry” into the crash.

In a posting on Twitter, Prime Minister Imran Khan said he was shocked and saddened by the crash. “Am in touch with PIA CEO Arshad Malik, who has left for Karachi and with the rescue and relief teams on ground as this is the priority right now,” he said. “Immediate inquiry will be instituted. Prayers and condolences go to families of the deceased,” he added.

Pakistan resumed domestic flight operations just this week, as the country eases lockdown restrictions imposed to curb the spread of the novel coronavirus. In the initial phase, PIA and Serene Air are the only airlines flying routes between Islamabad, Karachi, Lahore, Peshawar and Quetta.

In 2016, a PIA plane burst into flames after one of its two engines failed while flying from the remote north to Islamabad, killing more than 40 people. Six years earlier, in 2010, an Airbus A321 operated by private airline Airblue crashed into the hills outside Islamabad while flying from Karachi, killing all 152 people on board.