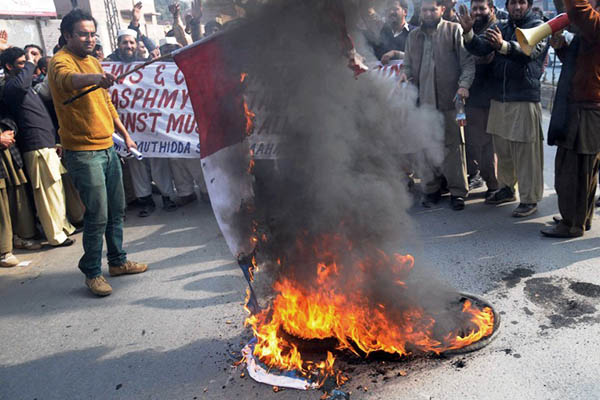 Three people injured in clashes between police and protesters of Jamaat-e-Islami’s student wing.

Two people were shot and another injured in clashes between anti-Charlie Hebdo protesters and police outside the French consulate in Karachi on Friday, an AFP correspondent at the city’s main hospital said.

Police fired water cannon and tear gas into the air as they clashed with protesters from the student wing of the Jamaat-e-Islami religious party, which is holding nationwide rallies against the depiction of Islam’s Prophet by the French satirical weekly. An AFP correspondent at Jinnah Hospital said at least three people were injured, including an AFP photographer.

AFP photographer Asif Hassan was shot while covering the protest, but appeared to be out of danger following surgery. “The bullet struck his lung, and passed through his chest. He is out of immediate danger and he has spoken to his colleagues,” Dr. Seemi Jamali, a spokeswoman for Jinnah Hospital where Hassan was taken, told AFP.

Hassan did not appear to have been deliberately targeted but police and witnesses said the Jamaat-e-Islami protesters had been shooting at police and Hassan was caught in the crossfire. The party denied it was responsible and blamed the police.

“There were around 350 protesters who wanted to go to the French consulate and when the police tried to stop them they started firing at the police,” said senior police official Abdul Khaliq Sheikh. A witness at the scene confirmed the police account.

But Hafiz Bilal Ramzan, head of Islami Jamiat-e-Talaba Karachi blamed police for the “indiscriminate” firing. “Police are responsible for those wounded during the protest including Asif Hasan,” Ramzan said.

The rallies come a day after Prime Minister Nawaz Sharif led Parliament in condemning the cartoons, regarded by many Muslims as offensive, in Charlie Hebdo, whose offices were attacked last week leaving 12 people dead.

Thousands of religious party activists are expected to turn out nationwide, including followers of Jamaat-ud-Dawah, the charitable wing of the banned Lashkar-e-Taiba militant group, which masterminded attacks on Mumbai in 2008. The Jamaat-ul-Ahrar faction of the Pakistani Taliban meanwhile issued a statement lauding the two brothers who carried out the Charlie Hebdo assault, saying “they freed the earth from the existence of filthy blasphemers.”

Protesters in Peshawar and Multan have burnt French flags on the streets. Rallies are also being carried out in the capital Islamabad and Lahore.

In addition to rallies held by religious parties, lawyers have vowed to boycott court proceedings to show their displeasure over the sketches.

Insulting Islam’s Prophet carries the death penalty under Pakistan’s blasphemy laws, with 14 people currently languishing on death row. Rights groups say they are used to persecute minorities and wage personal vendettas. Mobs often take matters into their own hands and lynch those accused of blasphemy, and such killers are widely feted.