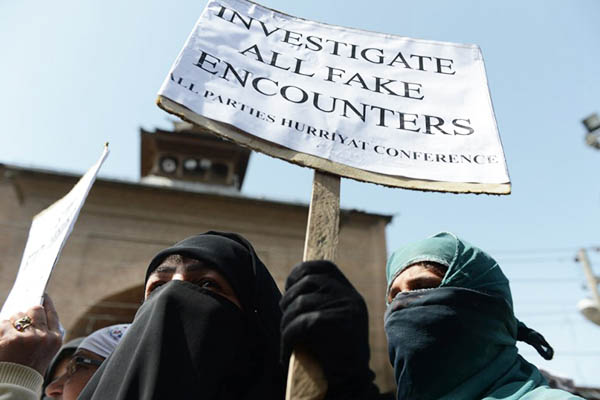 Indian police shot dead a 16-year-old boy on Saturday during an anti-India demonstration in India-administered Kashmir as a separatist strike shut down the Himalayan region for a second day, officials said.

The uncle of the boy said police first detained his nephew before shooting him at point-blank range in front of dozens of other protesters. Police said they would investigate the uncle’s allegations while admitting that officers had breached normal protocol and saying they regretted the incident.

The shooting happened during a protest on the outskirts of Srinagar, the main city of India-administered Kashmir, against a government crackdown on separatist leaders—the second day of violent clashes in the disputed Muslim-majority state.

“The police officer took my nephew aside and then shot him point-blank as we watched,” said Tariq Ahmed Sofi, the boy’s uncle. Javid Gillani, inspector general of police for the region, told AFP: “if that is true it will come out.”

“We will speak to him [the boy’s uncle] and investigate his version of the boy’s killing,” he added.

A separate police statement appeared to admit that there had been police wrongdoing. We “regret the unfortunate incident,” the statement said. “A preliminary enquiry conducted into the matter indicates that the forces deployed have acted in violation of the laid-down SOP,” it added.

India-administered Kashmir has been rocked by violent protests this week after the brother of a top rebel leader was killed by the army near the town of Tral in the south of the Kashmir valley.

Shops, businesses and schools remained shut on Saturday across several towns in the state in response to a strike led by top separatist leader Syed Ali Geelani against what he called “state terrorism” and “poisonous propaganda” by Indian media.

Authorities have put all top separatist leaders under house arrest to prevent them from leading protests.

On Friday, 30 people, mainly police officers, were injured as pro-Pakistan demonstrators set fire to an Indian flag and hurled rocks at them as protests over the arrest of another separatist leader turned violent.

Anti-India sentiment runs deep across Kashmir, a picturesque Himalayan region that is India’s only Muslim-majority state. Kashmir has been divided between India and Pakistan since the two countries gained independence in 1947. Both claim the territory in its entirety. Although several rebel groups have been fighting Indian forces since 1989 for independence or a merger of the territory with Pakistan, street protests have become the principal mode of opposition to Indian rule.