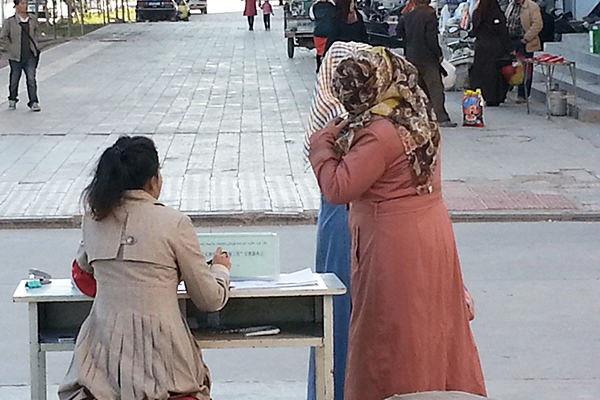 A veiled woman is ticketed in Kashgar, Nov. 9. Carol Huang—AFP

A Chinese government worker in the ancient Silk Road oasis of Kashgar beckons two women to her roadside stand and logs their details under the gaze of a surveillance camera. Their offence: wearing veils. The government worker is part of Project Beauty, a campaign to discourage women from covering their faces in an apparent attempt to improve security. The campaign affects Muslim Uighurs, the largest ethnic group in Xinjiang, and, critics warn, could backfire.

“We need to hold onto our traditions, and they should understand that,” says a 25-year-old woman who has been registered twice and who spoke on condition of anonymity. Offenders, she says, are made to watch a film about the joys of exposing their faces. “The movie doesn’t change a lot of people’s minds.”

Xinjiang, a vast area bordering Pakistan and Central Asia in China’s far west, beyond the furthest reaches of the Great Wall, has followed Islam for centuries. It came under Chinese control most recently during the Qing dynasty in the late 1800s. For years, it has seen sporadic unrest by Uighurs. Rights groups say the unrest is driven by cultural oppression and intrusive security measures, but China attributes it to extremism, terrorism, and separatism. China saw nearly 200 “terrorist” attacks in Xinjiang last year, according to state media on Monday. Several deadly incidents have occurred in Xinjiang this year. Kashgar residents say veil restrictions sparked at least one deadly conflict this year near the city, where 90 percent of the area’s 3.3 million residents are Uighur. The Chinese government has also blamed an attack a month ago in Beijing’s Tiananmen Square on “terrorists” from the area. Beijing sees the violence as evidence of rising extremism among the Uighurs.

“For the Chinese government, the causal process is: the Islamic extremists ask for independence, ask for separatism, then that’s why they set very strict limits on Uighurs’ religious activities,” says Shan Wei, a political scientist at the National University of Singapore. “For the Uighurs’ part, it’s, ‘OK, I wasn’t involved in any political movements, I’m not a separatist at all, but you set so many stupid restrictions on my daily religious activities that I hate you,’” he adds, pointing out that China’s other Muslim minorities did not face such rules.

Women in Kashgar sport a range of coverings, from bright scarves to somber Saudi-style black fabric cloaking all but their eyes. Policies to stop them from covering their faces, and to a lesser extent their hair, are not publicized. City authorities declined to comment and Xinjiang officials could not be reached. But Project Beauty stands can be seen around the city, and a tailor says campaign staff had instructed him not to make the full-length robes favored by Uighur women.

Other residents say that to enter government offices, banks or courts, women have to remove their veils and men have to shave their beards. In Hotan, another predominantly Uighur city 500 kilometers to the east of Kashgar, at least one hospital received government forms to report back on veiled patients. A Xinjiang government web portal featuring Project Beauty does not mention banning veils, but lists its goals as promoting local beauty products and other goods, and encouraging women to be “practitioners of modern culture.”

Xinjiang Daily, run by the ruling Communist Party, warned of the potential dangers of Islamic dress in a July opinion piece. “Some people with ulterior motives are distorting religious teachings” and “inciting young people to do jihad,” it said, adding that black robes induced depression and scared babies. The ruling party has sought periodically to stamp out veiling since taking power in 1949, first launching an atheism drive and banning the headgear altogether in the 1960s and 70s, said Gardner Bovingdon, a Xinjiang expert at Indiana University Bloomington. Restrictions were relaxed in the 1980s as China opened up, but tightened again the following decade after religiously-tinged protests broke out.

A worker at a Project Beauty checkpoint cites “security” as a motive for the campaign, and some Uighurs endorse the official precautions, saying thieves or suicide bombers might exploit the outfits to hide packages and their identity. But they also argue that some officials’ aggressive approach sparked resentment and violence, including an April attack by Uighurs on police in Maralbishi outside Kashgar that left 21 people dead. Beijing blamed “terrorists” who “regularly watched video clips advocating religious extremism.” A few Uighur residents say the “real reason” was that an official tried to force a woman to remove her veil and “people got upset.”

“They should have explained slowly that wearing these things is not allowed, ‘we know you are good guys but some criminals wear the veil and robe to do suicide bombs and other bad things,’” says one resident. A Uighur metalworker complains that women taught from youth to veil their faces found it hard to change, and that other Chinese Muslim men grew beards but only Uighurs were labeled terrorists.

Some women take a pragmatic view. A 35-year-old bakery owner with an orange headscarf says the need to unveil in government buildings did not overly bother her. Women are becoming less strict about veiling in any case, she says. But others remove their veils before approaching Project Beauty checkpoints to avoid trouble, says a 19-year-old woman from a jade-selling family. The Beauty people are everywhere, she says.