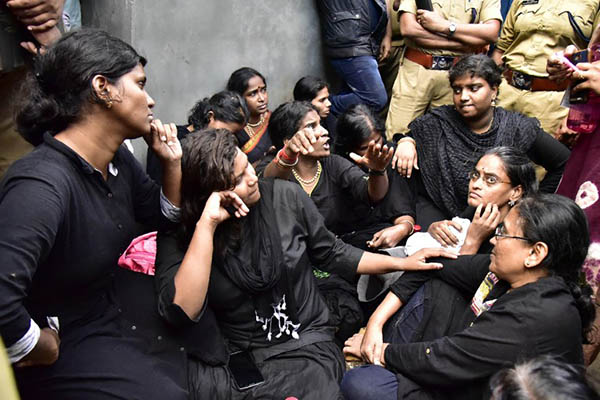 Hundreds of devotees on Sunday blocked a path leading to one of the holiest Hindu temples in southern India to stop a group of women making a new attempt to reach the landmark.

Women activists have been trying to enter the Sabarimala temple complex in Kerala state since a September ruling by the Supreme Court overturned a longstanding ban on women of childbearing age from entering the shrine.

Tensions peaked again after 11 women reached the village of Pamba at the foot of the hill with the Sabarimala shrine at the top.

Pilgrims have to walk four hours from Pamba to reach the shrine but hundreds of protesters, including women, noisily blocked the path. “The women are adamant they won’t withdraw until they have seen the deity at the Sabarimala temple,” said Selvi, a leader of the women, who only uses one name.

But after police failed to negotiate an end to the showdown—and with the numbers of angry protesters swelling—they escorted the women back to a base about 20 kilometers away.

Media reports said the women were heckled as they moved back.

“The police were not able to give us security [to go to the temple]. Hopefully now we are getting away from this place,” one unnamed member of the women’s group told reporters. “Another group of women are trying to get to Pamba,” she added.

Hundreds of thousands of Hindus—men, young girls and elderly women—normally trek to the temple during the festival season. But Sabarimala has become a major battleground between devotees and gender activists since the Supreme Court’s revocation of the ban on women between 10 and 50, which has sparked waves of protests and shutdowns across Kerala.

The Supreme Court is to hear challenges to its decision to overturn the ban from Jan. 22.

Many Hindu groups and Prime Minister Narendra Modi’s nationalist Bharatiya Janata Party oppose the court ruling. They argue that the court has ignored their beliefs that the deity Ayyappa was celibate.

Devotees clashed with police in October around Sabarimala leading to the arrests of more than 2,000 people. “If these women were actual devotees, they would not have been so blatant in their utter disregard for the age-old traditions and customs of Sabarimala,” said Sasikumar Varma from the region’s Pandalam Royal family and closely associated with the temple. “They just want to create trouble for genuine devotees,” he added.