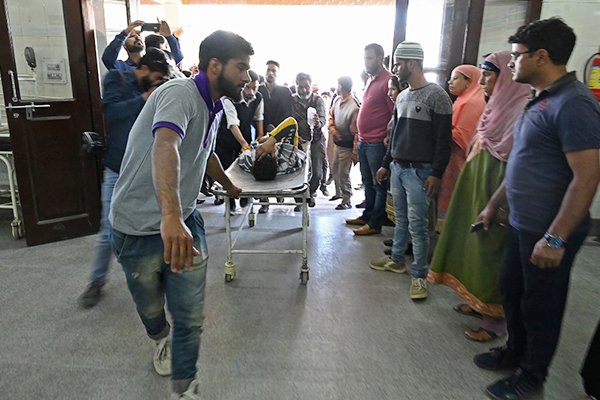 One killed, 70 others injured in two separate incidents

A man was killed and at least 70 people injured in clashes in India-Occupied Kashmir on Wednesday as protesters helped separatists escape two separate sieges by government forces, police and hospital authorities said.

While protests in support of surrounded separatists have increased on the Indian side of the divided territory in recent years, it is rare for them to escape. Insurgent groups fighting the 500,000 Indian soldiers deployed there demand independence or a merger with Pakistan.

Thousands of villagers poured onto roads on Wednesday as two suspected separatists fought a gun battle with soldiers from inside a house in the Kulgam area in southern Kashmir. Protesters pelted government forces with stones to give the fighters cover to escape, they said.

Fifty people were taken to a local hospital after government forces fired shotgun pellets and live bullets to push the protesters back, witnesses and hospital officials told AFP. “The house was blown up but the militants escaped in the confusion. No dead bodies were found in the debris,” a top police officer told AFP on condition of anonymity.

The officer said however that only three people were injured, one with a bullet and two with pellets in their eyes. “Scratches cannot be considered injuries,” he said, to explain the discrepancy in numbers.

Hundreds of villagers also clashed with government forces later in Shopian district after soldiers laid siege to a residential area looking for rebels. A local police official said one man was killed and another 20 people were injured in firing by government forces as a gunfight raged between suspected separatists and soldiers that also left a militant dead.

Clashes between separatists fighting Indian rule in Kashmir and government forces occur almost daily. More than 90 men have been killed so far this year.

Residents from nearby villages often throng the streets to help separatists by hurling stones at Indian soldiers.

Kashmir was divided between India and Pakistan after their independence in 1947. Tens of thousands have died in an uprising launched three decades ago, most of them civilians.