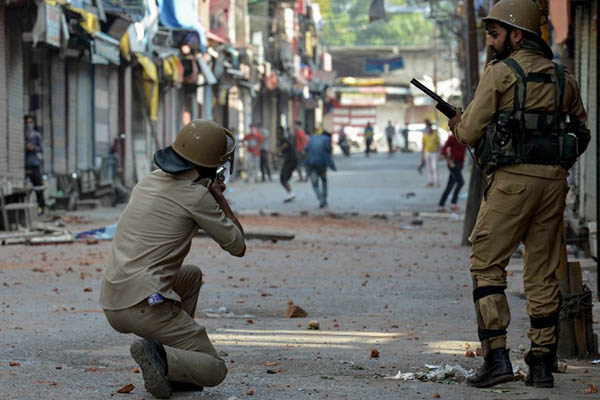 Hundreds of protesters tried to storm a military airbase in India-administered Kashmir on Monday, the third day of deadly clashes between government forces and demonstrators angered by the killing of a popular young rebel.

Police said 30 people had now died in the violence, most of them protesters killed by gunshot wounds as government forces fired live ammunition and tear gas to try to enforce a curfew imposed across the Kashmir Valley.

Thousands again defied the curfew to take to the streets on Monday. Police said several hundred protesters tried to storm an Indian Air Force Base about 25 kilometers south of the capital Srinagar as the worst civilian unrest since 2010 spread. “A few hundred protesters stormed the air force base,” said a senior officer on condition of anonymity. “We do not know if firearms were used, but the protesters were pushed back,” he said, adding there were no immediate reports of casualties.

Protesters also set police stations and vehicles on fire. On Sunday one police officer drowned when his armored vehicle was pushed into a river.

The demonstrations follow the killing on Friday of Burhan Wani, a 22-year-old commander of Kashmir’s largest militant group Hizbul Mujahideen, during a gun battle with government forces. The Mujahideen is one of several homegrown militant groups that have for decades been fighting around half a million Indian troops deployed in the region, calling for independence or a merger with Pakistan.

Around 300 people have been injured, including nearly 100 police, and hospitals say they are overwhelmed. There were also reports of injured protesters being targeted—one local doctors’ association said Sunday that tear gas canisters had been fired inside a hospital emergency room.

Another group, the Jammu and Kashmir Coalition for Civil Society, alleged that police had attacked ambulances taking the wounded to hospital.

The state government has called for calm and has cut off Internet and mobile phone networks to try to stop the protests spreading.

It is the worst civilian violence to hit the restive region since 2010, when mass protests broke out against Indian rule.

New Delhi warned Islamabad late Monday not to meddle in India’s internal matters after Pakistan accused it of violating human rights in the aftermath of Wani’s killing. “We have seen statements from Pakistan on the situation in the Indian state of Jammu and Kashmir. They reflect Pakistan’s continued attachment to terrorism and its usage as an instrument of State policy,” an Indian foreign ministry statement said. “Pakistan is advised to refrain from interfering in the internal affairs of its neighbors.”

On Sunday, Pakistan expressed deep shock at Wani’s death. A statement from the prime minister’s office condemned the “excessive and unlawful force” used against those protesting the killing, adding: “Oppressive measures such as these cannot deter the valiant people of Jammu and Kashmir from their demand of exercising their right to self determination.”

Kashmir has been divided between rivals India and Pakistan since 1947, but both claim the territory in its entirety. Tens of thousands of people, mostly civilians, have died in the fighting since 1989.

Violence has sharply declined in recent years following a major crackdown by the hundreds of thousands of forces deployed in the region. But a recent uptick in militant attacks has galvanized frustrated young Kashmiris, many of whom deeply resent the military’s presence.

Wani joined the Hizbul Mujahideen rebel group at the age of 15 after his brother was allegedly tortured by government forces. His strong presence on social media where he posted pictures of himself in army fatigues and videos of his band of fighters, made him a rallying point for Kashmir’s youth and tens of thousands of mourners attended his funeral.

On Monday, separatist leaders said a shutdown protesting his death should be extended by two more days, and called a rally in Srinagar on Friday. Also Monday, paramilitary troops evacuated 23,000 Hindu pilgrims left stranded after authorities shut the main highway.