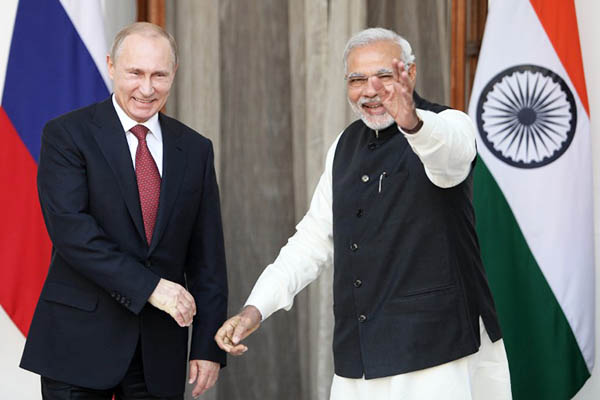 Putin is in New Delhi seeking to strengthen energy, defense and strategic ties in Asia in an attempt to revive Russia’s economy, badly hit by U.S. and EU sanctions over its backing of an uprising in Ukraine and annexation of Crimea.

At a joint press conference Modi, who has sought to cultivate closer ties with the United States since taking power in May, pledged India’s continued support for Russia. “The importance of this relationship and its unique place in India’s foreign policy will not change,” he said.

Modi, who swept to power promising to boost flagging growth, said energy security was “critical for India’s economic development and creating jobs for our youth.”

“We have outlined an ambitious vision for nuclear energy of at least 10 more reactors,” he said.

Russia has supplied two reactors to a plant at Kudankulam in southern India under a long-delayed agreement, and has been pushing to supply more. The two countries signed 20 agreements, including pledges to boost defense cooperation and explore joint energy projects in the Arctic, during talks that Putin said focused on “international issues.”

“Our approaches to key global and regional issues are either similar or very close,” he said.

The strong ties between India and Russia date back to the 1950s after the death of Stalin. But trade between the two countries was just $10 billion last year, which Putin, who is on his first visit to India since Modi was elected, said was “not enough.”

“He [Putin] wants to show the world that he isn’t isolated and to a certain extent he’s not—he still has the BRICS countries,” said Nandan Unnikrishnan, Russia expert from Delhi-based think-tank Observer Research Foundation, referring to the emerging economies of Brazil, Russia, India, China, and South Africa.

Moscow is seeking greater investment from Indian state-run companies in Russian oil and gas projects. Russia, which has the world’s second-biggest natural gas reserves, cancelled a $50 billion South Stream pipeline meant to pump gas to Europe without going through Ukraine. But Putin has poured cold water on a proposed pipeline pumping gas to India, saying it might not be cost effective, instead emphasizing current arrangements to ship liquefied natural gas in tankers.

During Putin’s visit, Russia agreed to produce helicopters in India, which is seeking to boost its manufacturing industry, and agreed to advance a long-delayed project to develop a joint fighter jet.

India, whose domestic industry struggles to manufacture high-tech arms, is in the middle of a defense spending binge in a bid to keep up with Chinese forces and a range of challenges in the volatile neighborhood.

Putin and Modi attended the World Diamond Conference, with both leaders keen on ramping up direct exports to India. “When a diamond travels to India every diamond has a footprint of Russia,” said Modi at the conference. “And every polished diamond has the fingerprint of India,” he added.

Russia is the world’s top producer of rough diamonds and the majority of them pass through India, where a cheap workforce cuts and polishes the gemstones before most are exported again for use in jewelry. India currently exports polished diamonds worth $20 billion. But only about a fifth of rough produce is sold directly from Russian mines to India, with the rest passing through diamond hubs such as Antwerp and Dubai.

Russian diamond mining giant Alrosa said it would sign deals with Indian buyers during Putin’s visit on Thursday, seeking to counter the threat of Western sanctions. The acting leader of Crimea, the strategic peninsula that Russia annexed in March, was also holding unofficial talks Thursday with business leaders in Delhi, a move likely to irk Washington.