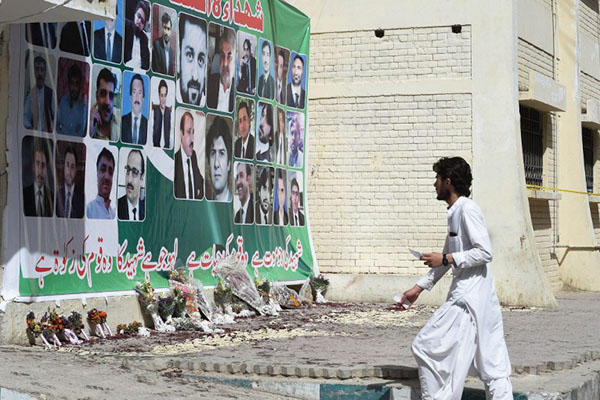 Attack on legal community has left entire segment of society in mourning.

In Pakistan’s most dangerous province, lawyers are a crucial force for justice. So when a bomb decimated Balochistan’s legal class this week, it left a vacuum that some say will never be filled.

The mineral-rich province is plagued by roiling insurgencies, hit by regular militant attacks, and run by political leaders who are widely seen as corrupt. The military, which has a growing stake in security as Chinese investment pours into the restive region, is accused of committing widespread abuses in the decades-long fight against separatist insurgents.

Balochistan is the deadliest province in Pakistan for local journalists, according to Amnesty International, and foreign media are effectively barred. Lawyers are usually the only people shining a spotlight on the province’s many problems.

Pakistan’s lawyers have been in the firing line before, but Monday’s massive attack, which killed 72 and injured more than 100—was unprecedented in scale.

Some 200 members of Quetta’s close-knit legal community had come to the Civil Hospital to mourn the fatal shooting hours earlier of a prominent colleague. The bomb—claimed by both the Pakistani Taliban and Islamic State—tore through the crowd.

“We have lost the whole leadership,” said Attaullah Langov, a former secretary of the Balochistan Bar Association. The loss is a hole “that cannot be filled,” he told AFP.

Below are profiles of five victims who played a leading role in Balochistan’s civic life.

Activist Sunghat Jamaldini was a member of the independent Human Rights Commission of Pakistan who had played an active role highlighting the plight of missing people in Balochistan. Rights groups have accused the military of “disappearing” thousands of non-militant separatists, a charge routinely denied by Army officials.

Jamaldini also fought for women’s rights, an ongoing battle in patriarchal Pakistan. An active member of the bar association, he hailed from a political family, and was the son of Senator Jahanzaib Jamaldini of the Balochistan National Party.

Mahmoon Hamdard, a cameraman for Dawn TV, grew up in a slum outside Quetta, starting his career as a guard for a private security company where he was posted to the office of Dawn TV.

Fascinated by journalism, he badgered staff to join the editorial team, working his way up to the position of cameraman as he tried to finish his studies. “He was very dedicated and committed,” said Syed Ali Shah, the Dawn TV bureau chief in Quetta. “He vowed to become a reporter… Hamdard would have risen high in the profession, had he been given the opportunity to live.”

Hamdard’s older brother died several years ago, and in line with cultural tradition he married his widowed sister-in-law in order to care for her four children. “He fathered three more children in the marriage,” Shah said. “Everybody is worried who will look after the widow and orphans now. Probably God.”

Lawyer Adnan Kasi passed his bar exam in London in the early 2000s, becoming the youngest ever head of the Principal Law College in Quetta, where he introduced several reforms, including measures to combat nepotism and cheating. He went on to found his own chambers and was practicing in the Supreme Court.

Kasi was running for the position of secretary in the Balochistan Bar Association elections, which were due to be held on Aug. 13.

Lawyer Baz Mohammad Kakar was one of the first Baloch leaders of the lawyers’ movement to pledge his loyalty to former Chief Justice Iftikhar Mohammad Chaudhary and his 2007-2009 movement to restore judges deposed by former military ruler Pervez Musharraf in his bid to cling to power.

Kakar, a Supreme Court advocate, had spearheaded the movement in the province for two years.

Abdul Rasheed Khokhar was a popular senior lawyer who was close friends with many in the lawyers’ movement against Musharraf.

The impact he had was aptly demonstrated by the crowd at his funeral beneath a scorching Balochistan sun on Tuesday, where people from all walks of life traveled with relatives from outside the province to watch him laid to rest.

His elder brother Abdul Hameed was desolate. “What can I say about my brother?” he asked. “The whole city is gloomy over the loss of almost the entire leadership of the legal community.”