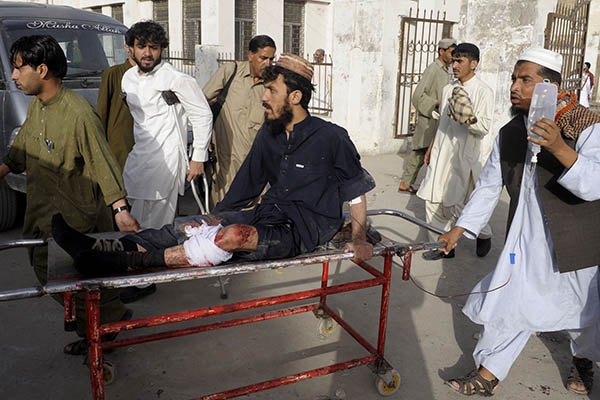 Gunmen killed nine people on Friday when they opened fire on worshippers leaving a mosque after Eid ul-Fitr prayers in Quetta, police said.

The attack outside the Sunni Muslim mosque on the outskirts of Quetta, which has been racked by sectarian violence, came a day after a suicide bomber killed 38 people at a police funeral in the same city.

The shooting was a bloody start to the Eid festival, which marks the end of the holy fasting month of Ramzan—marred in Pakistan this year by at least 11 attacks which killed more than 120 people.

“Four people opened fire when people were coming out of the mosque after saying Eid prayers, killing nine people and wounding 10 others,” according to senior local police official Bashir Ahmad Brohi. He said four people died at the scene while five others succumbed to their injuries in hospital.

Brohi said Ali Madad Jatak, a former provincial minister with the Pakistan Peoples Party, which headed the last national coalition government, was also in the mosque and may been the target. “But we are not sure at the moment and are investigating, “ he said, adding that Jatak escaped unhurt although bullets hit his car.

Another local police official, Sultan Ahmad, confirmed the incident and casualties outside the mosque, which is also a preaching and research center.

There has been no claim of responsibility yet for the attack.

Quetta has been the focus of a surge in sectarian violence, mostly targeting the Shia Muslim minority who make up around a fifth of Pakistan’s mainly Sunni Muslim population. Balochistan province also suffers from Islamist violence and a decade-long separatist insurgency by Baloch nationalists who want greater autonomy and a larger share of oil and gas revenues.