Home Culture Race to Save the Cheetah

Race to Save the Cheetah 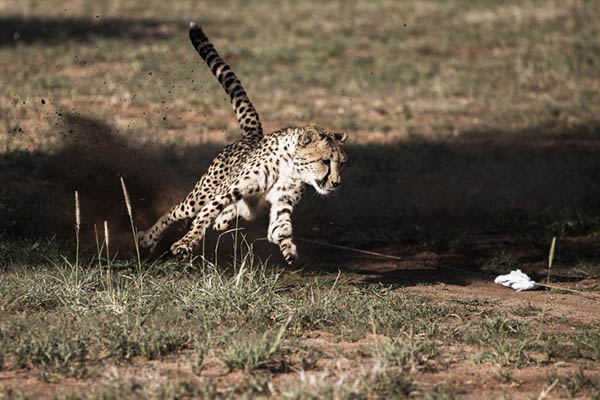 Lounging in the shade of a tree, Heathcliff the cheetah oozes sleek grace and power, but he is captive behind a wire fence—perhaps the only way that cheetahs will exist in a few decades’ time. A major survey released last week revealed that just 7,100 adult cheetahs remain in the wild, and that the species faces extinction without urgent new protection measures.

At the De Wildt Cheetah Center outside Pretoria, about 100 cheetahs are kept in large enclosures where they roam through a scrubby bushveld landscape.

The fastest land animal on Earth is critically vulnerable to the loss of its natural habitat—the major cause of numbers dropping from about 100,000 over the last 100 years.

Cheetahs have lost 90 percent of their habitat due to growing human populations, according to the study, which produced comprehensive new data on the elusive species. Forced into contact with people, cheetahs are shot by farmers to protect livestock, accidentally caught in snares set for edible bushmeat or their cubs are illegally traded to the Gulf states as exotic pets.

“Cheetahs are forgotten among the big species under threat. It is very scary to see what is happening to the numbers,” said Rita Groenewald, conservation education expert at the De Wildt center. “This report has highlighted the extent of the risk, which many people are not aware of. In one generation or two, we could lose the wild population. We need to educate people in schools, hunting associations and underprivileged communities.”

Cheetahs adapt poorly to living in protected areas such as wildlife reserves as they range over huge distances, struggle with a shortage of prey and their young are easy targets for eagles, lions and hyenas.

The new study, published in a U.S. journal, the Proceedings of the National Academy of Sciences, detailed how most cheetahs live outside protected areas.

“We have to try to develop programs so that cheetahs can survive alongside people,” Laurie Marker, report co-author and one of the world’s leading cheetah authorities, told AFP from her research base in Namibia. “There are things that can be done, and that is a cause for hope.”

Marker has promoted better livestock management to reduce the mass killing of cheetahs by farmers in Namibia, and pioneered the use of large Anatolian shepherd dogs that live permanently with cattle herds. Cheetahs are reluctant to take on the fierce Anatolians, and so they return to hunting in the bush.

For Marker, who has devoted her life to working with cheetahs, losing the species in the wild would be an unimaginable blow. “They are speed and elegance all mixed in together,” she said. “They are so beautiful, special and most unique of all the cats.”

Of the cheetahs still alive in the wild, all are in Africa except for fewer than 50 in Iran, with the others mainly in Namibia, Angola, Zimbabwe, South Africa, Botswana and Mozambique. Among the shocking statistics in the report by the Zoological Society of London and Wildlife Conservation Society was that cheetah numbers in Zimbabwe have plunged by more than 85 percent to 170 in 16 years.

Its authors called for cheetahs to be immediately listed as “endangered” instead of “vulnerable” by the International Union for Conservation of Nature (IUCN), a move that would boost support and resources.

Cheetahs travel widely in search of prey with some home ranges estimated at up to 3,000 square kilometers. Such ranges are a far cry from conservation centers such as De Wildt, where most of the cheetahs are homebred to maintain bloodlines, but will never learn the skills to enable them to be released into the wild.

Instead Heathcliff, aged seven, will live on—healthy, well-fed and much-admired by visitors, but never out on the open plains.