Home Lightbox Radicalization in Our Time 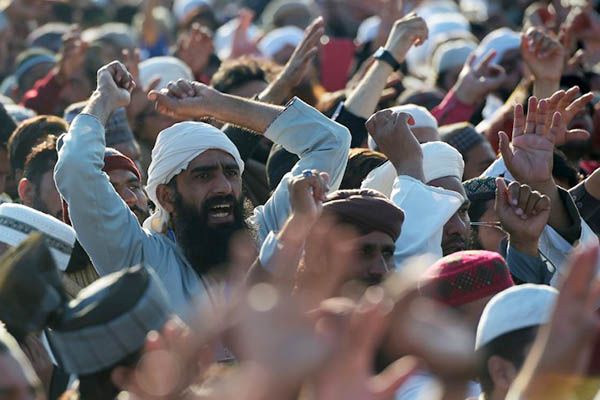 File photo of an anti-blasphemy protest in Islamabad. Aamir Qureshi—AFP

Radicalism, and the human behavior it evokes, in South Asia and the Middle East is intrinsically linked to religion. Referring to extreme actions taken to preserve the “roots” of an order threatened by change, religious radicalism also refers to a return to the “fundamentals” of faith by cutting away the “accretions” of time. It is, therefore, opposed to modern radicalism that endeavors to “get rid of the roots” that obstruct the onward march of human society. Both trends are extreme and utilize the threat of violence to achieve their aims. In the Muslim world, radicalism refers to a violent attempt to return human society to the fundamentals of faith. In Islam, it pits Muslims against non-Muslims, especially the dominant secular order of the West.

What makes religious radicalism difficult to counter is the “certitude” inculcated by the “revelation” of religion, its injunction of “martyrdom” in the name of God and the reward of the Hereafter. The Muslim mind is open to the divinely ordained concept of jihad that goes beyond the sovereignty of the state and its exigencies of time and opportunity. What strengthens the “privatization” of extremism is the supra-state obligation of jihad, which lends itself to easy interpretation as violence whether the state ordains it or not. This places religious parties above the political parties functioning under the state’s constitution and the democratic consensus evolved under it.

The Hindu-Muslim conflict, embodied in the history of India, led to the Partition of 1947 and the appearance of two nations on the scene. The two were differentiated by their past. Over 600 years of Muslim rule, the majority Hindu population was removed from political opportunity and compelled to adopt trade as a way of life. This led to the development of a secular mind among the Hindus, accompanied by an urge to acquire secular education. Then followed the 200 years of British Raj “equating” both the communities under a democratic order. Over these years the Hindu community had a higher “secular” literacy rate than the Muslims and dominated the economy, as was later revealed by the memoirs of Lahore, a Muslim majority city economically and socially dominated by Hindus and Sikhs.

In Pakistan, the population has been indoctrinated by a “guided” interpretation of the relationship with India as “enemy state.” Religious parties have been at the vanguard of this radicalism as arbiters of the concept of war (jihad) that coincides with the “militarization” of the political order through frequent “takeovers.” Starting in 1947, Pakistan’s religious parties offered extreme solutions of the confessional conflict in India. There was a time in 1923 when the Khilafat Movement, touched off by the banning of the caliphate in Turkey by Kemal Ataturk, dominated the Indian political scene. Gandhi led this largest Muslim agitation in history against Ataturk’s secular revolution because Muslim leaders like Jinnah and Allama Iqbal were reluctant to participate in it. Jinnah abstained and in time moved over to London; Allama Iqbal refused to head the University of Jamia Millia at Aligarh offered to him by Gandhi.

Why did Jinnah and Iqbal stay away from the Khilafat Movement? Both avoided the Khilafat leaders Maulana Muhammad Ali Jauhar and Shaukat Ali—the latter was reported as having bodily attacked Jinnah at a meeting; and kissing the feet of Gandhi who led this predominantly Muslim movement. What both leaders feared was the “certitude” of the Muslim mind and their refusal to absorb the political evolution of India under the Raj. Certitude takes birth under the conviction of fundamentalism—about the “unchanging essence of faith”—and intolerance of “accretions” to it. Certitude prohibits any acceptance of the middle ground to reconcile with those who differ on “fundamentals.” So close was Khilafat to the heart of the Muslims that they ignored the presence of Hindu Mahasabha in India’s parliament under British Raj.

Inside Hindu Mahasabha were the followers of Rashtriya Swayamsevak Sangh (RSS), led by Madhav Sadashiv Golwalkar, an MSc with a law degree, who in 1942 forbade the Hindus to take part in the Khilafat Movement under Gandhi because he believed in the “exclusive” Hindu state after the exit of the Raj. Gandhi was killed by the RSS in 1948 through its member Nathuram Godse, after which Golwalkar was arrested. Golwalkar died in 1973. Today, an offshoot of RSS, the Bharatiya Janata Party (BJP), is ruling India, fundamentally believing in Hindu Rashtra in which Muslims and Christians will have to live as second-class citizens. There is an irony in the fact that Pakistan succumbed to the religious edict right after Partition; Hindu-dominated India took more than 70 years to establish an order based on religion, the RSS supplying what the clergy had imposed on the state in Pakistan as jihad.

In 1979, the Shah of Iran fled Iran and left it to be ruled by Ayatollah Ruhollah Khomeini. He led the majority population of Shias in Iran and reopened the grand historical schism in Islam rendered violent in nature because of a “fundamental disagreement,” which has not been reconciled over centuries. Bilateral “certitude” has prompted the two communities to embrace extremism and resultant violence. There were two poles to the conflict after the Khomeini takeover: Iran and Saudi Arabia.

In 1979, the Soviet Union invaded Afghanistan at the request of the ruling Communist Party of Afghanistan. That brought the superpower conflict into the region with Saudi Arabia acting as the “funding source” of the mujahideen who were sent into Afghanistan to fight the “communists”. Muslim “warriors” from all over the world came to Afghanistan “via Pakistan” acting as a facilitator urgently in need of funding for its sagging economy after its nationalization in 1979. Pakistan started allowing the growth of its own “private” armies by Sunni religious leaders—as “lashkars” and “sipahs” that later undermined the state’s sovereignty with their radical-extremist vision of Islam.

In 1988, Taliban and Pakistani warriors funded and trained by Saudi Arabia and Pakistan attacked Mazar-e-Sharif in northern Afghanistan to get rid of the Tajik-Uzbek, Iran-supported government there. Approximately 2,000 Shia—including eight Iranian diplomats especially dispatched by Sipah-e-Sahaba—were killed. Sipah-e-Sahaba then ended up starting an anti-Shia movement in Pakistan, a state whose founder Jinnah himself was a Shia. In the process, General Ziaul Haq introduced a discriminatory-to-Shias Zakat Law, setting Pakistan on a path to become an extremist Sunni state greatly lauded by Saudi Arabia and such non-state-actor organizations as Al Qaeda.

In 2010, Pakistan became an “unaware” participant in the 2001 attack on New York with 19 Arab terrorists who first came to Pakistan to visit the Al Qaeda chief in Afghanistan thus involving Pakistan in the coming grand conflict that destabilized the country with extremism and violence. (The attack was planned in Karachi by a Pakistani member of Al Qaeda, Khalid Sheikh Muhammad, currently serving out a prison term in the U.S. as the “father of 9/11.”) Afghanistan was “saturation-bombed” and the pro-Al Qaeda Taliban government was forced to flee to Pakistan, already brainwashed into the new war of extremism, rendering it “violent” towards its own population: Shias, Ahmadis, Hindus, Christians and Muslims suspected of “secularism.”

Pakistan was deeply wounded as a state by the war of Islam in the region. As an “ideological” state—the implication of which few Pakistanis understood; especially the origin of the word “ideology” in the French Revolution (1789) that went bad by giving rise to the “reign of terror.” Embrace of “ideology” by Pakistan, as coined by Antoine Destutt de Tracy, a French aristocrat and philosopher, and later embraced by Lenin, meant that to become ideologically perfect it must reject democracy as the Soviet Union had by refusing to allow “opposition” to the Communist Party.

Pakistan then went through its “extreme moment” exemplified by the 2009 attack on the Sri Lankan cricket team in Lahore by an offshoot of Sipah-e-Sahaba called Lashkar-e-Jhangvi that, on the side, enjoyed killing Shia and thus endangering the very existence of Pakistan. That its anti-Shia passion has not subsided even after the death of the Al Qaeda chief Osama bin Laden in Abbottabad in 2011 was proved in 2020 by a massive road demonstration by the Sunni population of Karachi while the state of Pakistan lacked the capacity to understand how its “ideology” had undone it as a modern state.