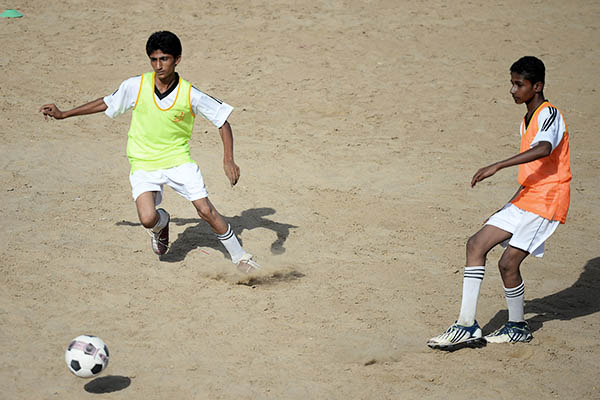 Children at the academy run by AmanSports and the Real Madrid Foundation are hoping to become Pakistan’s Cristiano Ronaldo.

It’s a long way from the Bernabeu, but on a dusty pitch in a Karachi slum, a group of scrawny boys in the famous white shirt of Real Madrid tear around after a football.

An academy backed by the Real Madrid Foundation opened in March in one of the oldest parts of the sprawling, violent metropolis. For youngsters like 13-year-old Mohammad Ashraf, who endure tough lives, it has brought rare moments of pleasure—and dreams of glory.

“I told my mother and then everyone in the house that we played football and everyone is happy for me,” an excited Ashraf recalled of his first day at the academy. Like most inhabitants of the area Ashraf’s father struggles to make a living from fishing.

Many local children are malnourished, few have more than the most basic education and most are expected to start work at an early age, repairing fishing nets. Opportunities for fun are limited and so the football academy—operated by the local charity AmanSports—is a ray of sunshine.

The Spanish giants support academies all over the world through their foundation, with the aim of promoting the values of sport and education. AmanSports last year convinced them to open a center in Karachi, and the Real Madrid Foundation provided equipment and training for coaches.

Khowaja Obaid, head of AmanSports, said running an academy linked to one of the world’s biggest clubs was a big challenge. “There were skeptics who were not sure why we were doing this,” said Obaid, who along with his colleague Myra Khan went to Madrid to get training on coaching. “The idea was to bring the best practice from around the world and give children access to sports, and Real Madrid is the biggest name that is out there in football in the world,” he said.

In Pakistan cricket is king, though football is growing increasingly popular in the country’s urban parts and the impoverished Balochistan province.

Few of the children at the academy were aware of Real’s pedigree when they joined, but all recognized one name—the Portuguese Cristiano Ronaldo. “I like Ronaldo because he scores fast goals and has done well for his club and country and I am proud of him,” said 14-year-old Mohammad Afzal. “I hope some day people will say the same for me.”

Pakistan, a power in Asian football until the 1970s, now languishes 159th in the FIFA world rankings—just below Hong Kong and Tahiti. But academy coach Mohsin Shah has hopes the center will one day produce stars. “I think if this academy goes on this game will spread and one day these kids will make Pakistan’s name in international football,” said Shah, himself a former international player.

The city seems to have some promise. In March a team from Karachi represented Pakistan in the Street Child World Cup in Brazil, securing third place—and perhaps more importantly a thumping 13-0 win over neighboring India.

The academy is used as an incentive to get kids to go to school—they must attend class before playing football—and AmanSports hopes to build the 50 playing now to 400, aged from six to 17. They are also keen for the Real Madrid Foundation to send coaches to Karachi to help the scheme improve.

“We are hoping that their trainers come here, evaluate our program, look at us—maybe they can point out some weaknesses,” said Obaid. “We are also using football as a vehicle to make kids better citizens, better human beings and better members of society.”