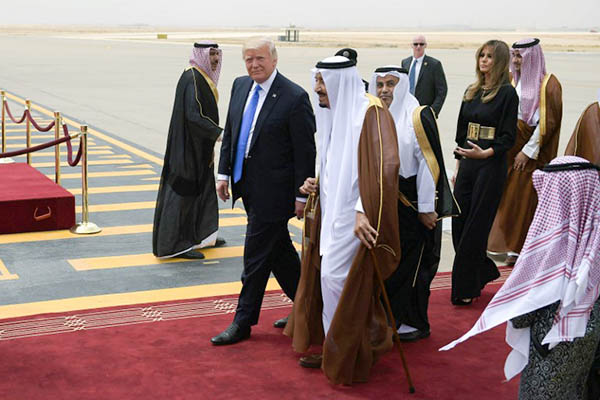 Pakistan was helplessly wringing its hands over the rapidly developing strategic overhaul in the region as U.S. President Donald Trump danced the sword-dance with Saudi King Salman and condemned non-attending Iran at the Arab-Islamic-American Summit in Riyadh on Sunday. The Arab leaders, whose citizens Trump doesn’t want to visit America, sat and listened. What did Trump get for this tour de force? Nearly $110 billion immediately, and $350 billion over 10 years, in Saudi purchases.

Trump wanted predecessor President Obama’s nuclear deal with Iran squashed and didn’t care if Europe, which was also part of the deal, got offended. He accused Iran of spreading terrorism in the Middle East; but Iran remains the only state fighting the Islamic State together with the United States while Turkey and Russia are more focused on targeting Syrian resistance and the Kurds. Trump accused Iran of spreading extremism in the region just as Tehran re-elected a moderate president in contrast to Saudi Arabia’s monarchic state. And while Pakistan’s Prime Minister Nawaz Sharif attended the summit, the Iranian border-guards fired four cautionary mortars into Pakistani territory. Trump has pocketed Saudi dollars and will land in Washington shouting “more jobs for Americans” while Europe and the Middle East mull the crisis of handling the Islamic State.

Pakistan doesn’t want to ruin its equation with Iran which could have solidified into mutual dependence had it not been for U.N. and American sanctions against Iran. Also, it can’t refuse to go along with Saudi Arabia given its economic dependence on its expat labor in the Kingdom and the United Arab Emirates plus many other unpublicized financial concessions. As it meditates sadly on its three alienated neighbors, Pakistan sees India getting along fine with the Kingdom while cozying up to Tehran, buying its gas-fields and building its ports. India doesn’t mind Trump getting close to Israel after decades of alienation over Palestine while Pakistan will feel greatly embarrassed by Arabs and Israel sailing in the same boat against “nuclearizing” Iran.