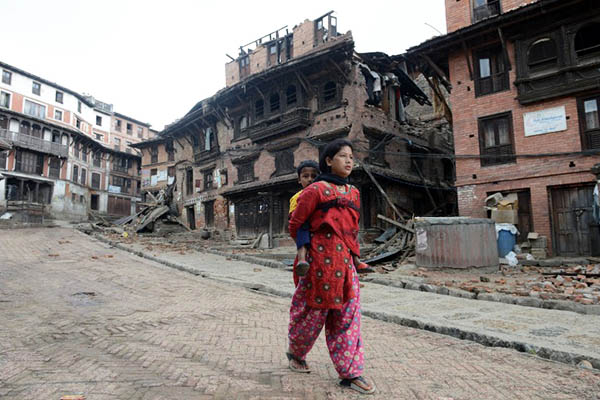 Death toll crosses 4,000, with nearly 8,000 injured, according to official estimates.

Rescuers in Nepal battled Tuesday to reach remote communities devastated by a huge earthquake that has killed at least 4,310 people, as the impoverished country’s leader said relief workers had still not reached many of the worst-hit areas.

With the U.N. estimating eight million people hit by the disaster, Prime Minister Sushil Koirala said getting help to some of the worst affected areas was a “major challenge.” Koirala told an emergency all-party meeting the government was sending desperately needed tents, water and food supplies to those in need.

But he said authorities were overwhelmed by appeals for help from remote Himalayan villages left devastated by Saturday’s 7.8-magnitude quake.

“Appeals for rescues are coming in from everywhere,” a statement from Koirala’s office quoted him as saying. “But we have been unable to initiate rescue efforts in many areas at the same time due to lack of equipment and rescue experts.”

With fears rising of food and water shortages, Nepalis were rushing to stores and petrol stations to stock up on essential supplies in the capital Kathmandu. Home ministry spokesman Laxmi Prasad Dhakal said Tuesday the official death toll had risen to 4,310, with a further 7,953 known to have been injured.

Officials had previously put the death toll at 4,010, making it the quake-prone Himalayan nation’s deadliest disaster in more than 80 years. Another 73 people died in India. The toll in China’s far western region of Tibet, which neighbors Nepal, rose to 25, the official Xinhua news agency said, citing the area’s disaster relief headquarters.

In Nepal, there are fears the death toll could jump once rescuers discover the full extent of devastation in villages outside Kathmandu.

Three days after the quake hit, rescue teams have still not reached some of the worst affected areas of Lamjung, the site of the quake’s epicenter. “The situation here is not good. So many have lost their homes. They don’t have enough water or food,” said Udav Prasad Timilsina, the head official in the neighboring district of Gorkha. “We haven’t even been able to treat the injured. We are in urgent need of essentials like food, water… and medicines and tents. Rescuers are coming in, but we need help.”

The quake triggered an avalanche on Mount Everest which buried part of base camp in a cascade of snow and rock, killing at least 18 people Saturday on the world’s highest mountain. The U.S. State Department confirmed Monday that two of its citizens were among those killed on the mountain, adding that they were aware of reports that two further Americans had died. Australia’s Foreign Minister Julie Bishop confirmed that an Australian woman also perished on Everest.

Rescue helicopters on Monday airlifted climbers from higher altitudes on the mountain where they were stranded above crevasses and icefalls, after evacuating scores of seriously injured from base camp the day before. Hundreds of mountaineers had gathered at Everest at the start of the annual climbing season, and the real scale of the disaster there has been difficult to evaluate so far.

Families who work in Kathmandu were packing onto buses—some even sitting on the roofs—in an exodus from the city, many for their home villages to determine the damage there. Mothers clutching children and men hauling bags were seen bargaining with drivers of the many buses clogging the roads out of the capital.

Long queues formed outside petrol stations while supermarkets were seeing a run on staples such as rice and cooking oil. Those who remained in the capital were sleeping outdoors in makeshift tents in parks and other open spaces, many having lost their houses and others too terrified to return home after several powerful aftershocks.

With just plastic sheets to protect them from the elements, many were desperate for aid and information on what to do next. “There is just too much fear and confusion,” said Bijay Sreshtha, who fled to a park with his three children, wife and mother when the quake hit.

The Nepalese rescuers were being joined by hundreds of foreign aid workers from countries including China, India and the United States.

Hospitals have been overwhelmed, with morgues overflowing and medics working flat out to cope with an endless stream of victims suffering trauma or multiple fractures.

Pledging $10 million in relief to help the victims, U.S. Secretary of State John Kerry said he had been shocked by the “gut-wrenching” images of the death and destruction. Australia said Tuesday it was raising its aid to $4.7 million and sending a military plane to bring relief supplies and evacuate its stranded citizens.

But the lack of space at the country’s only international airport was hampering efforts to bring in relief by air. Japan’s International Cooperation Agency said a disaster relief team was making a third attempt Tuesday to enter Kathmandu, after being twice turned away from a crowded airport on Monday.

The quake is a serious blow to the economy of one of the world’s poorest countries, already reeling from a decade-long civil war that ended in 2006. Nepal and the rest of the Himalayas, where the Indian and Eurasia tectonic plates collide, are particularly prone to earthquakes.