Home Lightbox Retreat of the State

Retreat of the State 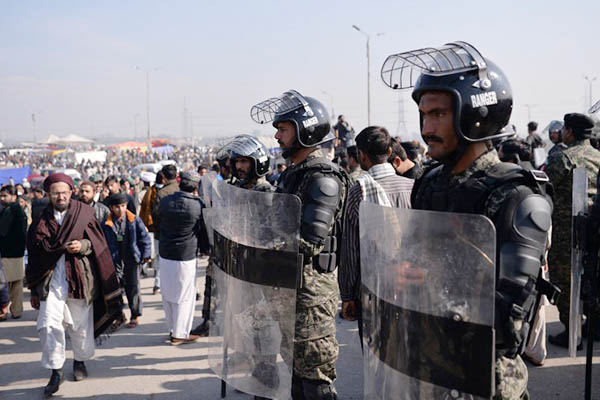 During a debate on the value of “entertainment” at the Staff College Lahore, a group of senior civil servants were informed that a civilization’s culture provides creative escape from conflict and violence for the masses. Culture was defined as the quality of society in pursuit of pleasure and tolerance. Entertainment, meanwhile, allowed people to get together without harming one another and was needed in Pakistan to create an environment of tolerance. Unfortunately, non-state vigilantes in Pakistan actively work to prohibit entertainment—ipso facto tolerance—their strength being commensurate with the retreat of the state and its executive writ.

More and more cities were succumbing to vigilantism arising out of madrassas. Two years ago, police found “some 160 madrassas and 72 day-scholar Quranic institutes in Islamabad are not registered with the government.” In November 2017, the Tehreek-e-Khatm-e-Nabuwwat, the Tehreek-i-Labaik Ya Rasool Allah and the Sunni Tehreek besieged Islamabad after accusing the government of allowing the federal law minister to insult Islam’s Prophet. After 17 days of traffic snarls and often-violent agitation, the Supreme Court took note of the government’s “negotiation” with the vigilantes and asked: “Tomorrow, if an enemy of the state chooses to occupy the streets of the capital, will the government try to negotiate with them?”

By retreating from its jurisdiction, the state of Pakistan has allowed its normative functions to decline and die. The ideological state, ever an enemy of entertainment, has beaten a retreat and allowed the madrassa hierarchy to take over the job of implementing ideology. In consequence, the culture of entertainment has retreated, the shrines where people of all creeds gathered and sang and danced suicide-bombed. Pakistan’s hinterland of jihad has produced the actual custodian of its ideology.

North from besieged Islamabad, the city of Peshawar saw Additional Inspector General Ashraf Noor killed by a suicide bomber on Nov. 23 despite the provincial government bribing Rs. 300 million to a madrassa in a bid to keep the killers at bay. Almost a decade ago, the former chief secretary of Khyber-Pakhtunkhwa province, Khalid Aziz, wrote: “Warlord Mangal Bagh’s group in Khyber Agency and similar outfits which have proliferated after 9/11, have spread fear by indulging in kidnapping and murder of policemen on a regular basis. Peshawar’s residents wonder how long it will be before this country becomes another Somalia.” The time may have come.