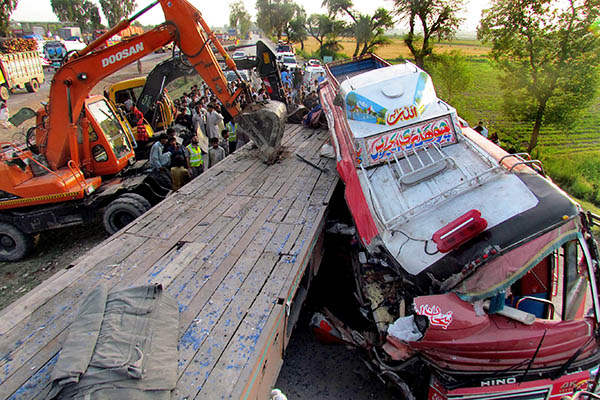 At least 42 people dead, 17 others wounded after bus collides with tractor-trailer.

At least 42 people were killed and 17 wounded on Sunday when a bus traveling to Karachi collided with a tractor-trailer, police said. The dead included 14 children and 13 women, they added.

The accident happened in the town of Sukkur in Sindh province. Fida Hussain Shah, a senior Sukkur police officer who gave the casualty figure, said the bus driver was killed on the spot while the driver of the tractor-trailer was wounded.

Police said the cause of the accident was not yet clear. All the dead and injured were riding in the bus, apart from the tractor driver. Sharjeel Kharal, another senior police official, confirmed the incident.

Most of the injured were in critical condition and many were transferred to hospital in Karachi after initial treatment in Sukkur. Among the dead were six members of a 10-person family traveling in the bus. Two more family members were injured while two were unhurt—Maryam Bibi, 18 and her six-year-old brother Samad.

“We were ten members of one family, six of them died and two were injured,” a weeping Bibi said as she recounted the accident. The family was traveling to visit other relatives in Karachi, she said.

Pakistan has one of the world’s worst records for fatal traffic accidents due to poor roads, badly maintained vehicles and reckless driving. Sixteen people were killed and 49 injured when an overloaded truck crashed into a ravine early this month in Punjab province. A collision between two buses and a petrol tanker killed 35 people in southwest Pakistan in late March.