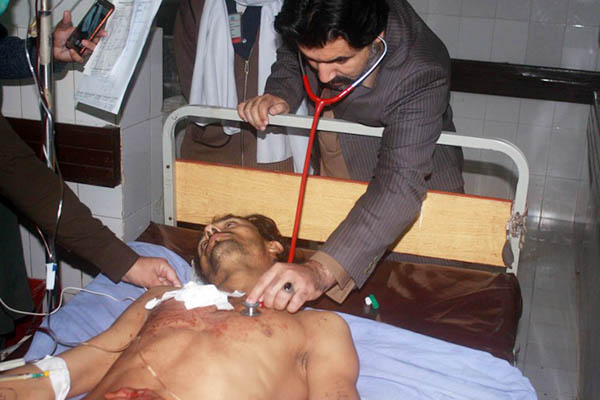 A roadside bomb killed at least six people and wounded eight others on Tuesday in the tribal area bordering Afghanistan, officials said.

The blast took place in North Waziristan, one of Pakistan’s seven semi-autonomous tribal districts, where the Army has been battling Taliban militants.

“The casualties came from a bomb planted in a motorcycle parked on a roadside in Khadi market of Mir Ali town,” said Kamran Khan Afridi, a senior administration official in the area. “The blast targeted two vehicles passing along the road. Six people who died and eight who were injured are believed to be the vehicles’ passengers,” he said.

Mir Ali town and neighboring Miranshah, North Waziristan’s capital, have long been home to Taliban militants. Although violence in Pakistan has declined in recent years following a series of military offensives against insurgents along the northwestern border, militant groups are still able to carry out bloody attacks.

In a number of assaults in recent weeks, militants have killed several people in the northwest as well as in Balochistan province.

Last week, gunmen wearing burqas boarded a rickshaw and killed nine people in an attack on an agriculture institute in Peshawar.

This latest wave of attacks came as hundreds of people displaced from their homes during the offensives in North Waziristan prepared to return, after the military declared the region safe.