Home Scope Round One 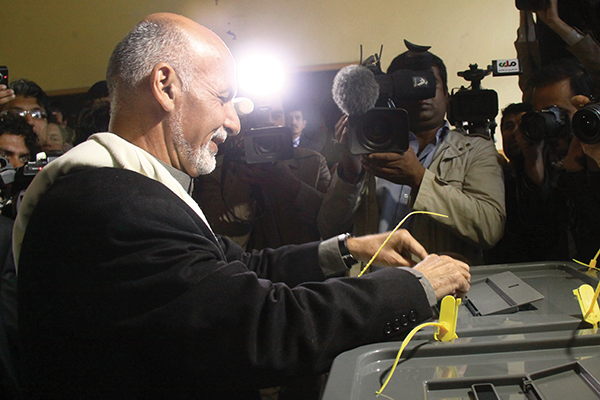 For those who watched Afghanistan’s elections unfold on April 5, the unexpectedly high turnout, lack of violence, and relative smoothness of the polling process prompted jubilation. Four years of preparations at the Independent Election Commission since the 2010 parliamentary elections, along with security gains, have paid off, as have the large rallies and media campaigns waged by the candidates. The Commission claims that 7.5 million votes were cast in the election, compared to 5.6 million in 2009.

But for the few journalists who visited the country’s insecure rural areas, the situation seemed unchanged from previous elections that were characterized by low turnout and fraud. When I traveled to Wardak, a war-torn province west of Kabul, there were hardly any voters in most of the polling centers along the national highway. Off the highway, in the hinterland contested between the Taliban and government-backed militias, it was not even clear which polling center had opened. In the village of Ambukhak in Chak district, the school that was supposed to hold the center, along with 1,200 ballots, was empty, and I found the ballot boxes up the hill, where they were in the process of being stuffed by a local strongman.

Given that three quarters of Afghanistan’s population lives outside its cities, the question of what happened to the rural vote is not an incidental one. Yet for the moment, it is being treated as such by the two leading candidates themselves, who—each being unlikely to get the required majority—has an incentive to allow the system to move swiftly to a runoff election. While the total vote count will not be released until later this month, preliminary, partial results—as well as opinion polls ahead of the election—show Ashraf Ghani, a former World Bank official and government advisor, and Abdullah Abdullah, who placed second to the incumbent president Hamid Karzai in 2009, well ahead of the other six candidates. The other serious contender, Zalmai Rassoul, appears to have done poorly. Having run a lackluster campaign that had many speculating he was not truly interested in the presidency, he has made himself scarce since the election and seems unlikely to make a fuss over placing third.

While the other candidates may grumble that their poor showing was due to fraud, they will also not raise any serious objection. As Noah Coburn and Anna Larson point out in their recently published book on Afghanistan’s post-2001 political system, Derailing Democracy in Afghanistan, Afghan elections are not simply about winning. (This is true in other countries, as well.) Candidates like the former mujahideen commanders Abdurrab Rasoul Sayyaf and Gul Agha Sherzai ran in order to demonstrate their status as national-level politicians, and, more importantly, to demonstrate they commanded a block of votes that could be negotiated for in the runoff election.

Karzai has surprised his worst skeptics by remaining mostly aloof from the elections. Though Rassoul was widely seen as his preferred candidate, especially after Karzai’s brother Qayyum dropped out of the race in favor of him, there was never any clear signal from the palace, and some of Karzai’s closest allies felt free to back other candidates—for example, the influential former governor Haji Din Mohammad, Karzai’s national campaign manager in 2009, was a visible supporter at rallies for Ghani.

But the president still has a few strong cards up his sleeve, should he choose to play them. The network of elites who have benefited from an alliance with the government—always a fractious and shifting group, but clearly beholden, especially in the south and southeast, to Karzai’s patronage—will now be anxiously calculating their best chance of retaining their advantages with the next government. Karzai could shift this group behind a preferred candidate in the second round, which, if Ghani and Abdullah are as closely matched as they appear to be, may be decisive—and it is more likely to go to the former. It is also possible that, if the first-round results are highly controversial, he could broker a coalition between the two candidates that avoids a runoff.

The runoff election, if it occurs, is scheduled for the end of May. Campaigning is bound to be fierce; while the major candidates have mostly eschewed negative remarks about each other thus far, the two finalists will each have a clear target. More worrying is the potential for ethnic tensions between southern Pakhtuns and northern Tajiks, the country’s two largest ethnic groups. Ghani, a Pakhtun, has no Tajiks among his running mates and has been accused of sympathizing with the chauvinist strain present in Pakhtun nationalism (something he has been careful to disavow on the campaign trail). Abdullah, though half-Pakhtun, is strongly associated with the mostly northern Tajik political party, Jamiat-e Islami.

But candidates and their supporters have thus far demonstrated maturity on the campaign trail. The greatest potential for instability will come from a runoff election that is marred by fraud, and, in particular, one where the margin is close enough that the Election Commission will effectively decide the result by deciding how many votes to disqualify as fraudulent. While there are indications that in insecure rural areas many of the same problems of low turnout and ballot-stuffing have persisted, the Commission, as well as the press and international groups, are already claiming that fraud was much lower in this election than in the 2009 and 2010 ones. A premature rush to judgment will only embolden fraud in the second round. For now, these problems are being glossed over with the assent of Ghani and Abdullah, who are eager to have the runoff seen as legitimate. The next round may not be as easy.

West Now Has More Leverage in Afghanistan than...