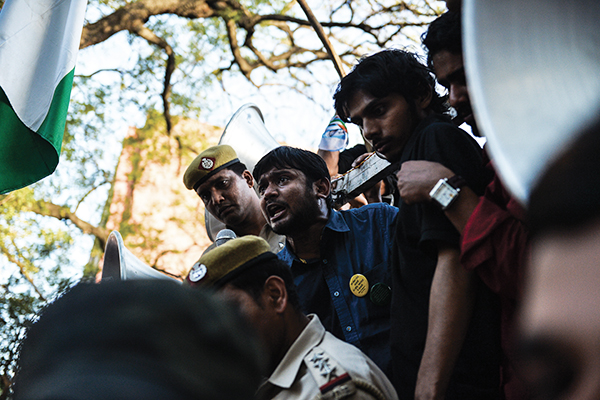 India is discovering its young in a new light. It is a young country—53 percent of Indians are under 25—but its culture, which equates wisdom and maturity with age, venerates the old. Congress party leader Rahul Gandhi, 45, is considered ‘young,’ even though he’s older today than when his father, Rajiv, became prime minister. In today’s India, it is the 20-somethings who are now leading the way.

Kanhaiya Kumar, president of the Jawaharlal Nehru University’s students union, had been arrested for sedition after anti-India slogans were raised at a meeting the union had organized. On March 3, millions of Indians were transfixed when they saw the 28-year-old emerge from jail and deliver an electrifying, largely impromptu speech before an audience of hundreds of students who had come to cheer him.

If the charges against him were proven, Kumar would have received a very long prison sentence. When he was produced at the court, Kumar was beaten up by pro-government lawyers and thugs dressed as lawyers. Later, some of them boasted about having roughed him up again while he was in police custody. Subsequent investigations showed that at least part of the evidence against Kumar was doctored—he had himself raised no anti-India slogan, and a photograph showing him speaking in front of a disputed map of India was also manipulated.

When he was released, there were many outside the jail baying for his blood. (He has been attacked once since and threatened twice; a group placed a bounty on his head and put up posters in New Delhi calling for his death.) But that night, Kumar looked relaxed, confident, and cheerful, and he used irony, humor, and charm to win many new fans. (“Is Kanhaiya single?” a female journalist posted on her Facebook wall, only half joking.)

Together with the union’s vice-president Shehela Rashid—who was herself brilliant in an interview to the Wire where she explained why students are restive and how the left gives her a framework to address politics and society—Umar Khalid and Anirban Bhatacharya have become familiar names. Khalid and Bhatacharya are out of judicial custody, but they face charges and their professors have written glowing articles about them in Indian newspapers. I know of young students in three Indian cities who were apolitical until recently and who now feel inspired by them and have participated in marches.

This would be important enough if it was only about JNU, India’s premier university. But it is not. The current campus unrest comes on top of the outrage many Indians felt over the tragic story of Rohit Vemula. The dalit student at Hyderabad Central University took his life weeks before he would have turned 27. He did not blame anyone, but he had been raising his voice against discrimination toward dalits and his scholarship had been stopped by the authorities. I was in Mumbai in February when thousands of students in a city known to be immune to student politics had marched to protest Vemula’s death.

In each case, the government responded ineptly. First, the government tried to claim that Vemula was not dalit and it tried to distance its ministers from the actions at the university which punished the dalit students. In Parliament, the 39-year-old minister for human resources, Smriti Irani, called Vemula “a child,” expressed sympathy over his death, and chided the opposition for politicizing his death, even as Delhi police was busy arresting Vemula’s mother, who was part of an antigovernment protest. In the case of JNU students, too, the government relied on fabricated tweets and videos to insist that anti-national slogans were raised on campus.

Beyond Delhi and Hyderabad, in Pune, the Film and Television Institute of India—which has produced some of Bollywood’s finest directors, cinematographers, and technicians—has remained paralyzed for months, because students have been on strike. They do not want the government-appointed chairman, Gajendra Chauhan, to continue. Chauhan acted as Yudhishthira in the 1980s television serial about the Sanskrit epic Mahabharata and is otherwise known for acting in B-films, which are clearly meant neither for families nor for the squeamish.

On the other side of the political spectrum, the National Institute of Technology in Srinagar is riven by unrest, after Kashmiri students cheered West Indies after they defeated India in the World Cup T20 semifinal. Angered students from elsewhere in India protested, and what was essentially a childish squabble took on political overtones, as Kashmiri students wanted to unfurl the Kashmiri flag and students from elsewhere in India wanted to fly the Indian tricolor. Politically ambitious activists tried to intervene, and the state government increased security on the campus. India’s ruling Bharatiya Janata Party, which took umbrage over students raising pro-Kashmir and anti-India slogans at the JNU, now had to go along with its coalition partner Jammu Kashmir People’s Democratic Party deciding to crack down on displays of Indian nationalism on the Srinagar campus. There is lack of consistency here, but this is hardly the first time a political party has been inconsistent.

If there is a pattern to these incidents, it is this: the BJP wants control over India’s future. It is determined to remain in power for a long time. To do so, it seeks to control not only Parliament, but also other parts of society where people may organize. The classroom is one such example, and states where the BJP is in power have made or are making substantial changes to the curriculum to reflect a more nationalistic interpretation of history which emphasizes Hinduism.

The college campus—where young people may discuss ideas passionately and argue with one another about the kind of society they wish to see—is another area of the BJP’s focus. Many Indian campuses have supported political radicalism. JNU, in particular, has often been called “Kremlin-on-the-Yamuna,” given the left-leaning orientation of many of its faculty and a substantial number of its students. Challenging those ideas is fine; it is part of intellectual inquiry and academic freedom. But the government’s supporters have injected the idea of nationalism, and calling their opponents ‘anti-national’ only escalates the debate to a completely different level. And the Srinagar incident raises peculiar dilemmas for the BJP.

In the weeks immediately following the unrest, JNU’s faculty and other academics organized teach-ins about the current situation and also raised more profound questions about inclusiveness, about the idea of India, about secularism and nationalism, and about identity. Many questioned the Indian state over its treatment of minorities, dalits and adivasis, and over the use of force in dealing with dissent. But the JNU campus is where the radical, left-leaning voice has historically been more vocal. And few professors have questioned the left’s assumptions, including acceptance of communist violence.

That came into sharp focus during one recent exchange, the poet Makarand Paranjpe reminded Kumar that Stalin and Mao were mass murderers and corrected an inaccuracy in Kumar’s much-admired speech. Paranjpe is right in pointing that out. Ideas should be challenged and questioned, and where else if not on a campus? The danger lies in forgetting nuances, replacing existing ideas with a new, revisionist history that is riddled with its own mythologies and errors. To cleanse the campus of rebellious and dissenting thought so that new generations of university students will only be exposed to strong, nationalistic narratives—where one ideology or faith predominates, one leader towers above all, and one version of nationalism prevails over others—can only lead one way. And the history of the last century alone shows us how ruinous that path is.