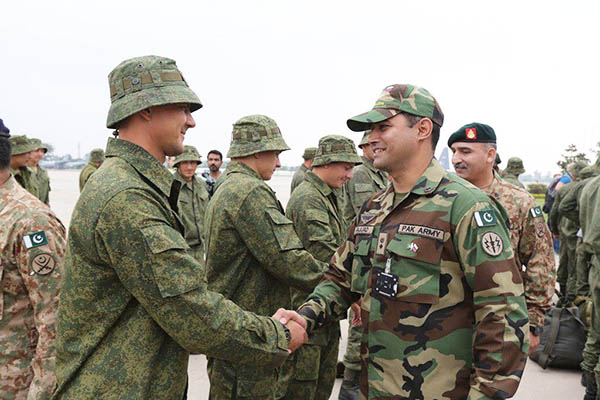 Russia and Pakistan will carry out their first joint military exercise this weekend, the Pakistani military said on Friday, at a time of heightened tensions between Islamabad and nuclear-armed rival India.

The exercise is being seen as a demonstration of closer defense ties between the two countries after they signed a military cooperation pact in 2014.

It comes after intense drills by the Pakistani Air Force (PAF) earlier this week that officials said had been long-planned, including landing combat aircraft on the Islamabad to Lahore motorway.

Pakistani defense and security analyst Hasan Askari said the exercise “signifies Russian desire to expand their options in South Asia,” adding it was the “natural” result of closer Indian ties with the U.S.

Islamabad has also been negotiating with Moscow a deal to buy combat helicopters. “These helicopters were to be supplied this year but now they are likely to arrive in 2017,” Askari said.

On Thursday the Pakistan Air Force (PAF) launched Highmark Exercise, shutting down sections of the motorway leading out of the capital to land ‘several’ combat aircraft for the first time in six years, a senior security source told AFP. The drill came as India and Pakistan traded angry words over an attack on an Indian army base in disputed Kashmir that Delhi has blamed on Islamabad.

But Pakistani officials said Highmark is a routine exercise, with a senior security official telling AFP that preparations, including setting the dates it would take place, had begun around one year ago. The drill is aimed an enhancing “operational preparedness,” the official said, and will continue for several weeks followed by months of evaluation.

Foreign ministry spokesman Nafees Zakariya said in Islamabad on Thursday the moves were regular and routine.

Eighteen soldiers were killed in last Sunday’s attack on an Indian army base in Kashmir, which was the worst of its kind to hit the divided Himalayan region in more than a decade, increasing hostility between the nuclear-armed neighbors.