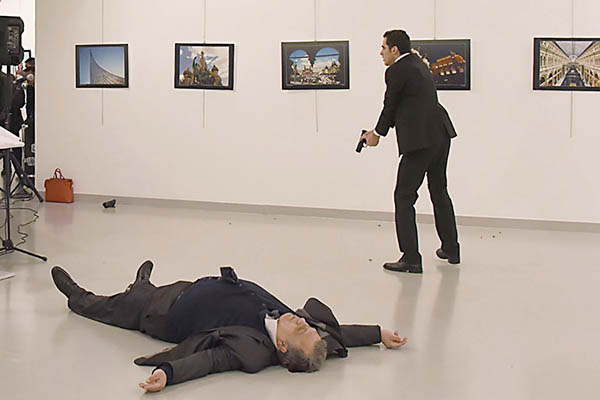 The Russian ambassador to Ankara was shot dead in a brazen attack by a Turkish policeman at an art exhibition on Monday in what both sides branded an “act of terror.” The assassination, by a gunman shouting “Allahu Akbar” and “Don’t forget Aleppo,” came after days of protests in Turkey over Russia’s role in Syria and on the eve of an unprecedented meeting of the foreign ministers of Turkey, Russia and Iran on the conflict.

Here is what we know so far:

Dramatic footage showed the very moment the lone gunman—dressed in a dark suit, white shirt and tie, shot his target in the back as the envoy was speaking at the opening of a Russian photography exhibition in Ankara. The assailant is seen standing behind the ambassador and then swaggering around the gallery waving his automatic handgun and pointing aggressively into the air.

The man shouts “Allahu Akbar” and then talks in Arabic about pledging allegiance to jihad in Arabic. He then switches to Turkish, shouting: “Don’t forget about Syria, don’t forget about Aleppo. All those who participate in this tyranny will be held accountable.”

The state-run Anadolu news agency said the gunman had been “neutralized” in a police operation after a 15-minute standoff when he refused to surrender.

The gunman was identified by the Turkish interior minister as 22-year-old Mevlut Mert Altintas, who had worked in the Ankara anti-riot police squad for the last two-and-a-half years. It was not known if he was on duty at the time and if not, how he managed to gain access to the cultural center with a weapon.

Media reports said Altintas’s mother, father and sister were detained for questioning at their homes in western Turkey.

Ankara mayor Melih Gokcek speculated on his official Twitter account that the policeman may be linked to the group of exiled preacher Fethullah Gulen, who is blamed for the July coup aimed at toppling President Recep Tayyip Erdogan. It is not yet clear whether the assassin was acting alone and no group has claimed responsibility. But it will add further to jitters in Turkey, which has been rocked by a wave of deadly bomb attacks carried out by Islamic State jihadists or Kurdish militants.

The slain ambassador, Andrei Karlov, was a veteran career diplomat who helped weather rocky ties between Moscow and Ankara. Karlov, 62, was appointed to Ankara in 2013 at a time when the two countries were pushing to boost trade ties despite deep differences over the Syria conflict.

Russia’s foreign ministry spokeswoman Maria Zakharova described his killing as a “tragic day in the history of our country and our diplomatic service.”

The married father of one spent a large chunk of his career—which stretched back to the Soviet period—working on the volatile Korean peninsula, in both Seoul and Pyongyang. The Hurriyet Daily News said Karlov was the first ambassador to be assassinated in Turkey, although the British consul was killed in an Istanbul bombing in 2003 and Israel’s consul general was kidnapped and shot dead by leftist militants in 1971.

The shooting came on the eve of a crucial meeting between the Turkish, Russian and Iranian foreign ministers on the Syrian conflict. At the exact moment of the attack, Turkey’s Foreign Minister Mevlut Cavusoglu was on a plane flying to Moscow for Tuesday’s talks, which he insisted would go ahead.

Protesters in Turkey have held Moscow responsible for rights violations in war-wracked Aleppo, with thousands massing outside the Russian consulate in Istanbul.

Diplomatic relations between Ankara and Moscow sank to their worst levels since the Cold War in November last year when a Turkish jet shot down a Russian war plane over Syria. But relations have since warmed, with intense contacts in recent days that led to a deal for evacuations from Aleppo.

Erdogan swiftly called President Vladimir Putin and both sides described the killing as a “provocation,” insisting it would not be allowed to cast a shadow on ties.