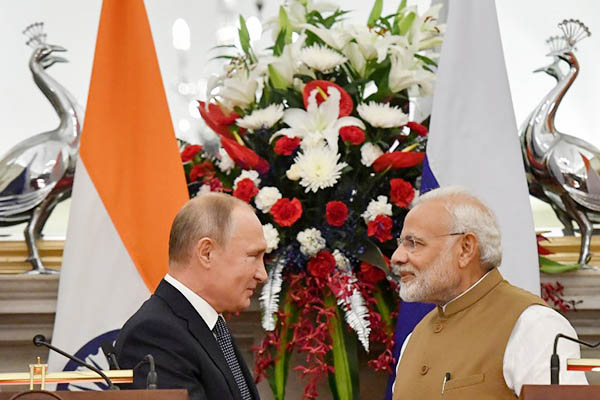 On Oct. 5, India signed a $5 billion deal with Russia to purchase the “S400 Long Range Surface to Air Missile System,” defying U.S. threats of sanctions on nations involved in large-scale defense and intelligence cooperation with Moscow. The U.S.’s grand strategy is containment of Russia, and the proliferation of the S-400 systems—already purchased by China—is against its strategic priorities. Will, then, the United States sacrifice its strategic interests and offer a sanctions-waiver to India?

“The S-400 is Russia’s fourth-generation air and missile defense system,” accessing aerial targets up to 400 kilometres away, and has the potential to counter threats from ballistic missiles, Unmanned Aerial Vehicles and aircraft. As longstanding strategic partners, Russia and India are no strangers to bilateral defense agreements, with India’s Prime Minister Narendra Modi hailing the partnership as time-tested. At the same time, over the last 15 years, New Delhi has remained in a strategic partnership with Moscow’s perpetual bête noire, Washington. The situation is even more puzzling considering the State Department’s stated desire to make India the centerpiece of its Asia-Pacific strategy and repeated attempts to convince New Delhi to reduce its defense dependence on Moscow—as clearly delineated by America’s Countering of America’s Adversaries Through Sanctions Act (CAATSA).

Of particular importance are two sections of the CAATSA, which became public law in August 2017. Section 231 of the Act calls for imposing “five or more sanctions” on entities involved in “a significant transaction” related to defense or intelligence sectors of Moscow. Section 235 describes 12 kinds of sanctions prohibiting American banking institutions, the U.S. Government or any foreign financial institution falling under the jurisdiction of the U.S. financial system, from engaging in lending payments, credit services or issuing licenses to export goods or services to sanctioned entities “that would benefit the sanctioned [country].”

In light of this legislation, will the State Department impose sanctions on India? Many political analysts doubt it. The reason, of course, being that Washington has designated New Delhi as a major defense partner with a view to countering the rise of China. Therefore, some senior officials within the U.S. Department of Defense support exemptions to India, among other strategic partners, from the sanctions—permissible under specific conditions.

“The President may waive the application of these sanctions” if he ascertains that doing so would be “in the national security interest of the United States,” says Section 236(b) of the CAATSA. How, then, would exempting India, if at all, be in America’s “national interest”?

The answer lies in the National Defense Strategy (NDS) unveiled by Washington in December 2017. Introduced by the administration of President Donald Trump, it shifts America’s primary security threat from terrorism to China and Russia. In the case of India, it is Beijing, as much as Moscow, which currently occupies Washington’s attention.

With regard to Russia, the U.S. administration pursues long-standing Cold War tactics: total containment. Thus, even if Washington grants a waiver to India, it would entail stringent caveats, as argued by Ashley Tellis, a senior fellow at the Carnegie Endowment for International Peace. Among the expected contingencies would be a commitment from New Delhi to decrease its defense dependence on Russia by proportionally increasing defense trade with Washington. In so doing, the State Department would allow only a transaction-specific exemption.

Even so, does this mean the U.S. would be ok with India incorporating the Russia-designed air defense system? This is unlikely, given that New Delhi is interested in the purchase of F-35, the advanced stealth-strike jet fighters from the United States, which is the only country in the world currently producing fifth-generation airstrike technology. According to Tellis, incorporating American F-35 into Russian systems would compromise the latter’s stealth characteristics and its “information management system and electronic warfare capabilities,” but more significantly may cause the U.S. Air Force to lose operational competitiveness.

Moreover, Russia has also sold the S-400 air defense system to China, New Delhi’s putative rival, raising questions over the competitive edge India would even secure from this deal. Admittedly, this could be overcome by the purchase of F-35 stealth-strike jet fighters from the United States. Again, the interoperability of these two systems is technically against U.S. interests. And, Washington would go hard against proliferation of S-400 systems—as exemplified by its S-400 related sanctions on Chinese defense entities.

Considering all these complications, what explains India’s signing of the defense deal with Russia? A key reason is that Russia is the oldest and strongest strategic partner of New Delhi. Moscow accounts for nearly 62 percent of India’s defense imports, according to a report by the Stockholm International Peace Research Institute (SIPRI) published in 2018. Historically, India has considered Moscow a strategic counterweight to China: In 1965, it was largely due to Russia that China did not exploit the Indo-Pak war and make an armed incursion along the Sino-Indian disputed territory in India’s north. In 1971, the Treaty of Friendship between Moscow and New Delhi emboldened the latter to wage war against Pakistan’s eastern wing, now Bangladesh, even as the U.S. and China supported Pakistan strategically.

Fast-forward to 2018 and New Delhi has been diversifying its defense relations, incorporating the United States, France and Israel, and proportionately decreasing its defense trade with Moscow. Russia and China, meanwhile, have been enhancing their strategic convergence, as exemplified by the Vostok exercises in September 2018—the largest-ever military drills conducted by Moscow. Recent moves by Russia, China, Iran and Pakistan in finding a solution to the Afghan conflict are also unsettling New Delhi, which is displeased by an upsurge in ties between Moscow and Islamabad. Russia and Pakistan have been expanding their defense relations, conducting joint military drills, uniting against the Islamic State militant group in Afghanistan, and favoring an equitable share of the Taliban in Kabul. In this context, New Delhi’s defense deal with Moscow may serve both military and diplomatic purposes to pull the European state back into India’s orbit.

Still, as many strategic analysts point out, signing a deal is not the same as implementing it. There is a belief that New Delhi will postpone the payment and the procurement to avoid the sanctions, which will not come into play until the procurement phase 24 months later. Besides, India has a long tradition of postponing agreements without making a dent in bilateral strategic relations. It signed a groundbreaking civil-nuclear agreement with Washington in 2008 that has yet to result in a single nuclear power plant. It took New Delhi more than a decade to sign the U.S.’s foundational agreements of Logistics and Memorandum of Agreement and Compatibility and Communication Security arrangement.

In signing this defense deal, then, India has merely sought to sustain its strategic partnership with Russia while hedging its bets on convincing the U.S. to waive any sanctions that may apply. Since President Trump has the authority to waive the sanctions, the Indian administration may be trying to secure his approval through a new bilateral trade deal. Referring to the offer, Trump told reporters that the “tariff king” India wanted a new deal with the United States “primarily to make [him] happy”.

Spurred on by its international strategic significance, India may well have overplayed its hand with the Russian defense deal—at least in the short-term. The U.S. will be forced to either impose sanctions or offer a waiver shrouded in caveats. Washington cannot afford to back off its attempts to contain Moscow; allowing India’s S-400 deal to proceed entirely unhindered would be a bridge too far.

Khokhar is a research officer at the Center for International Strategic Studies (CISS), an Islamabad-based think tank where he looks at Pakistan’s foreign policy and South Asian strategic affairs. He can be reached on Twitter (@Riaz1Khokhar) or by email (riazkhokhar11@gmail.com)

The technical utility of S 4000 systems apart, the decision to maintain trade relations with Russia has the support of almost all political parties. This underlines the principle , in the long term,that India cannot remain in one camp and deny itself opportunities that come its way in its pursuit of its national interests. New Delhi is not going out of its way to confront Trump but it is signalling that its choices cannot be restricted on certain fundamental issues. And in the process, it is prepared to pay the price. A major pitfall while analyzing such developments is t o view through the lens of cold war alignments. Also, foreign policy needs to be calibrated in tune with the strategic and economic environments which are now in a state of flux.