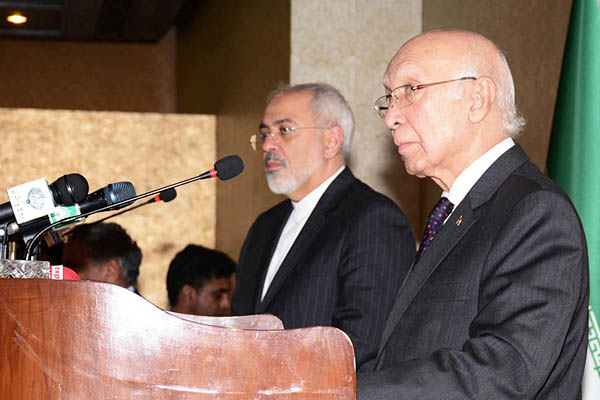 Pakistan’s top diplomat said Thursday he would visit India later this month on an “ice breaking” tour as violence simmers in the disputed Kashmir territory.

“I can briefly confirm that I will be going to India on Aug. 23 for talks,” Adviser on Foreign Affairs Sartaj Aziz told a joint press conference with visiting Iranian foreign minister Javad Zarif in Islamabad.

There has been a rise in cross-border shelling along the de facto border separating the two halves of Kashmir in recent weeks. On Thursday, a grenade exploded outside a mosque in India-administered Kashmir, injuring 10 worshippers after morning prayers in the first such incident in 14 years, local police said.

After months of stalemate and recriminations, Indian Prime Minister Narendra Modi and his Pakistani counterpart Nawaz Sharif spoke for around an hour while visiting Russia in July, recognizing their “collective responsibility to ensure peace and promote development.” Modi also accepted an invitation from Sharif to visit Pakistan next year, raising hopes of an improvement in perennially difficult relations.

Aziz said his visit was “not a breakthrough in terms of composite dialogue and all the issues but at least it is an ice breaking on some issues… and let’s hope it will lead to further more comprehensive dialogue on the other issues between the two countries.” He added that the two prime ministers had agreed to the step during their meeting in Russia.

India and Pakistan have fought three wars since the partition of the subcontinent in the wake of independence from Britain in 1947, two of them over Kashmir. Since 1989 several rebel groups have waged campaigns against the hundreds of thousands of Indian forces deployed in Kashmir, hoping to achieve independence or the territory’s merger with Pakistan. Both countries agreed on a border ceasefire in 2003, which has largely held, though violations are regularly reported from both sides.

Zarif, meanwhile, expressed hope for the revival of a stalled gas pipeline project connecting Iran to energy-starved Pakistan, following last month’s signing of a historic nuclear deal between Tehran and world powers. “The impediment to greater and more enhanced cooperation between Iran and Pakistan will have been removed, through the removal of sanctions and that is why the work on the Iran-Pakistan pipeline could go ahead more expeditiously,” he said following talks with Aziz and Sharif.

Iran completed its part of the project in 2013, but Pakistan put construction on hold citing U.S. and European sanctions on Tehran linked to its nuclear program.

The International Atomic Energy Agency is set to verify Iran has implemented its commitments in December, paving the way for sanctions to be lifted from the start of next year.