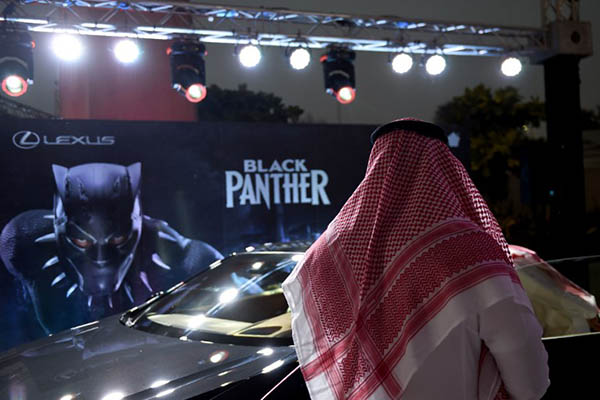 Saudi Arabia on Wednesday unveiled its first cinema in over 35 years with a private screening of the blockbuster Black Panther, the first in a series of trial runs before movie theaters open to the wider public.

The invitation-only gala event comes after the conservative kingdom lifted the ban on cinemas last year as part of a far-reaching liberalization drive, with U.S. giant AMC Entertainment granted the first license to operate movie theaters.

Anticipation had been building after the authorities announced earlier this month that Saudi Arabia’s first cinema in over three decades would open on Wednesday, but officials dubbed the event at Riyadh’s King Abdullah Financial District a “dry run.”

AMC chief executive Adam Aron said ticket sales would commence on Thursday for the first public shows on Friday. But local authorities indicated the test screenings could last for days before an online ticketing system is formally launched. Officials earlier said movie theaters are expected to open to the public in May.

“This is a historic day for AMC. This is a historic day for your country,” Aron told an audience of government officials and industry figures as he stood before a large screen in a converted concert hall. “Welcome to the era when movies can be watched by Saudis not in Bahrain, not in Dubai, not in London… but inside the kingdom,” he said before the screening of Black Panther.

Religious hardliners, who have long vilified movie theatres as vulgar and sinful, were instrumental in shutting them down in the 1980s. The move to reopen cinemas is part of a modernization drive by reformist Crown Prince Mohammed bin Salman, who is seeking to balance unpopular subsidy cuts in an era of low oil prices with more entertainment options—despite opposition from hardliners.

Black Panther, a film about a young monarch of a fictional African jungle kingdom, has drawn parallels with the Saudi prince. “This is a story about a young [royal] who transforms a nation. That might sound familiar to some of you,” Aron joked.

International theater chains have long eyed the kingdom as the Middle East’s last untapped mass market, with its more than 30 million people, the majority of whom are under 25. AMC Entertainment signed a non-binding agreement in December with Saudi Arabia’s Public Investment Fund to build and operate cinemas across the kingdom.

Saudi state media has said the company expects to open 40 cinemas across 15 Saudi cities over the next five years. AMC will still face stiff competition from other heavyweights including Dubai-based VOX Cinemas, the leading operator in the Middle East.

Similar to television programming, movies are likely to face some censorship in the kingdom, where sex, religion and politics are widely seen as taboo subjects.

Long known for its ultra-conservative mores, the kingdom has embarked on a wide-ranging program of social reforms that includes mixed-gender concerts and a historic decree allowing women to drive from June. In February, Saudi Arabia’s General Entertainment Authority announced it would stage more than 5,000 festivals and concerts in 2018, double the number of last year, and pump $64 billion in the sector in the coming decade.

The reform stems partly from an economic motive to boost domestic spending on entertainment as the kingdom reels from an oil slump since 2014. Saudis currently splurge billions of dollars annually to see films and visit amusement parks in neighboring tourist hubs like Dubai and Bahrain.